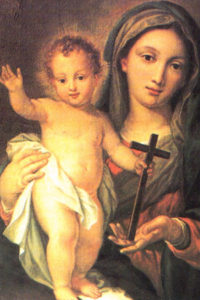 Several celebrations crowd in on this day.  It is New Year’s Day 2019.  It is the octave of Christmas.  It is the beautiful feast celebrating Mary as the Mother of God.  (It is also my birthday but I am not sure this fact ranks with these other markers!).

The celebration of Mary as the “Mother of God” is an ancient tribute to the virgin of Nazareth.  Even though this feast day was established on this day in modern times , the title itself goes back to one of the earliest Councils of the Church at Ephesus in 431 AD that declared as an article of Christian doctrine that Mary is the theotokos, literally, the “God bearer.”  At issue was the question whether or not Jesus was truly human.  His divinity was not in question but there were Christians who could not believe that Jesus was also truly human.  Declaring that Mary was truly the mother of Jesus and the “theotokos” affirmed what is the central core of Christian faith, the mystery of the Incarnation – “the Eternal Word of God becomes flesh.”

The Church has been celebrating this astounding assertion of faith all during these days of the Christmas season.  And on the Octave of Christmas, we affirm it again.  But there is a wider backdrop to all of this, namely the fact that all is grace, all is gift.  Neither Mary in all her beauty and goodness, or Joseph, the faithful and obedient hero of the infancy story, nor anyone before or since, earned the gift of God’s unconditional love for us that is manifested so incredibly in the reality of Christmas.  God becomes one with us to save us through God’s unconditional love.

I came across a remarkable reflection on “grace” or “unconditional gift” in what might be considered an unexpected source—a column by a political writer in the New York Times for December 23, entitled, “The Uncommon Power of Grace.”  Most of the time, the author, Peter Wehner, comments on our political scene from a rather conservative point of view.  But he also occasionally reflects on the deeper meaning of our life and times from the vantage point of his devout Evangelical faith.

That is the case here.  Quoting the famed spiritual writer, C. S. Lewis, Wehner affirms that the notion of unconditional grace is unique to Christian faith, a belief that goes against every instinct of humanity which is programmed to cause and effect, to earning what we receive, to exchange and barter.  The affirmation of Christian faith is that God’s love is unconditional and unmerited.  As Wehner notes, “There’s a radical equality at the core of grace.  None of us are deserving of God’s grace, so it’s not dependent on social status, wealth or intelligence.  There is equality between kings and peasants, the prominent and the unheralded, rule followers and rule breakers.”

The column goes on to conclude that those who are touched by grace and aware of living completely as a gift of God, are prone to be gracious themselves.  People who love us “despite our messy lives, stay connected to us through our struggles, always holding out the hope of redemption.”

The astounding and “uncommon power” of grace is what we celebrate in the feast of Christmas and what, today, we celebrate in lifting up the figure of Mary, the “God-bearer.”  In her very being, in her own body, the mother of Jesus proclaims that God’s love, God’s grace, is unconditional and eternal.