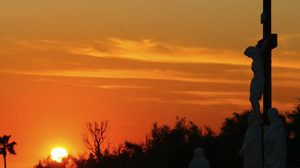 As I read the Word of God for today’s Liturgy, I was struck by two powerful challenges: to let go of the destructive desire to kill our enemies, and to respond to the call to be missionary disciples.

In the first reading, from the Book of Samuel, we have the continuing saga of the decline of King Saul and the ascendency of King David. First, a little background. We have been reading about Samuel and his calling for about a week now, how his birth came about and how Hannah, his mother, consecrated him to God. Samuel grew up under the watchful care of Eli, the High Priest. It was revealed to Eli that God “will choose a faithful priest who do what I have in heart and mind.”

Samuel was God’s choice and God directed Samuel to first anoint Saul as King, and when Saul abandoned God’s ways, to anoint David as his replacement. It came as no surprise that Saul became jealous of David, even though David delivered Israel from the clutches of their mortal enemy, the Philistines. Saul becomes more convinced that David would eventually want to overthrow him and make himself king. So Saul does what every insecure leader does, he goes after his opposition with every intention of killing his rival. He brings with him his powerful army, thinking that he can eliminate God’s chosen one by force! We see this theme played out time and time again in the Scriptures.

Saul quickly finds out that God is in charge and not his evil intentions. David finds Saul at his most vulnerable moment, and could have easily killed him, but he decided not to do this, not to give into his baser desires. Rather, David lets him live and then offered to make peace with him. As we find out later, Saul ultimately destroys himself, and God’s choice, David, takes over Saul’s kingdom.

The Gospel passage for today’s Mass continues with this theme of God choosing those that will ultimately overcome sin and death. As Jesus begins his ministry in Mark’s gospel, Jesus chooses those he wanted to have at his side so that he could send out to preach. I believe that we would benefit greatly if we took our time to reflect upon the reason why Jesus chose his apostles, that is, why Jesus chose us as his apostles. No matter whether we are named Hannah, Samuel, David, Mary, Peter, or John, we have all been chosen to do God’s work here on earth.

As Jesus would say to us later, “Do not be afraid, for I am with you until the end of time.”