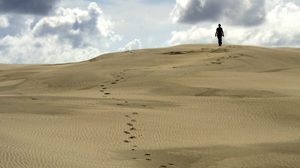 Today’s scripture readings remind us that performing good deeds, doing the right thing, can be misinterpreted and even twisted into something that many will condemn.

First we hear of David, a young inexperienced “warrior” who seems almost naïve about his ability to take on the experienced, grizzled, powerful Philistine warrior, Goliath.  Goliath was a giant of a man who had killed many soldiers over the years.  His very presence struck fear into the hearts of all of King Saul’s soldiers.  No one was willing to face Goliath.  And then young David stepped up.  King Saul was heartened by David’s willingness to take Goliath on but was less than confident that this young companion of his son was up to the task.  He tells David to be realistic and back down.  David asserts his confidence…not in his own skills, but rather in God’s faithfulness in protecting him.  And so, with King Saul’s blessing, David goes out to meet the invincible, ferocious Goliath.  The outcome was startling with David’s easy vanquishing of the formidable Goliath.  King Saul is at first delighted but soon is overtaken with fear that David is plotting to take over the kingship.  David has no such intention but his relationship with King Saul soon deteriorates due to the King’s paranoia.  But one thing sustains David, both in his confrontation with Goliath and his struggle with King Saul’s fears, his complete trust in God’s faithfulness to him.

In the Gospel for today we have one of the many stories about Jesus’ healing someone, in this case a man with a withered hand.  Just as in the case with David, we see this story play out on more than one level.  What drives the story is the love and compassion Jesus has for the man with the withered hand.  Jesus wants to heal him and restore him to full health.  But it is the Sabbath and that certainly complicates things!   Jesus knows that there will be those who will be offended if he cures the man on the Sabbath.  He also knows that his enemies will twist his good deed and make of it a violation of the Sabbath.   Nonetheless, Jesus reaches out and heals the man’s withered hand.  The man healed rejoices but the enemies of Jesus continue to plot to have Jesus put to death.

Strangely enough, even though our lives are much less dramatic than the lives of David and Jesus; and, we would never dream of even comparing our lives to these two remarkable religious leaders, we, too, can be intimidated by what others might think or say about our efforts to show compassion and love.  Let’s make our prayer for today be that God will give us the courage and wisdom to live our Christian life with the same generous integrity that we see in our readings today.