The Feast of St. Agnes 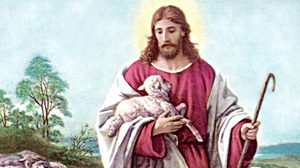 St. Agnes is the name of a popular 3rd century saint.  She is esteemed because of the way she prevailed against seemingly overwhelming odds against her, thanks to her dependency on God to protect her.  In Latin there is a close similarity between her name, Agnes, and the Latin word for lamb: Agnus.  This likeness can be construed in two different ways: one favorably to her, the other unfavorably.  The best way to appreciate this difference is from the scriptures, especially the New Testament.  The unfavorable way would be the references by Jesus in the gospels, to the tendency of sheep to get lost.  Jesus likely noticed, in His travels by foot along the pathways throughout Galilee, the flocks of sheep feeding in the fields bordering His route, usually with a shepherd nearby, and likely now and then, the shepherd departing from the main body of sheep to bring back a sheep that had wandered off by itself, thereby exposing itself to attack by more violent animals than sheep are.  This observation gives rise to the surprisingly frequent references of Jesus to sheep, in His parables and stories.  There was something about this animal that lent itself to a major lesson Jesus wanted to impart to us: that many of us are like sheep, wandering away from the straight and narrow path that promises safety and protection.  And He, like a Good Shepherd, came to show us the way to His Father in heaven.

The church too was quick to note the pertinence of this tendency of sheep, as Jesus likely hoped it would.  And an instance of this is her desire to vividly describe the role of the bishop as the shepherd of the flock committed to his care by prescribing a special vestment for him (primarily an archbishop).  It was a special kind of stole called a pallium, bestowed, in memory of St. Agnes, on a bishop elevated by the Pope to the rank of archbishop.  And the pallium was made from the wool of a lamb.  And given the conjunction of Agnes, Agnus, and pallium, this ceremony often occurs on the Feastday of St. Agnes, January 21.  It was an apt description of the job of a new archbishop to exercise care and caution over the “flock” committed to his care.

There is one area, however, where the comparison of this thirteen year old girl with the term “lamb”, usually thought of as a helpless creature before the onslaught of fierce animals, was somewhat inaccurate.  St. Agnes was the furthest thing from being like a weak and lost animal.  Many a suitor sought her hand in marriage, young though she was (thirteen years of age), because of her attractiveness and beauty, but she turned down each of the several proposals made her.  This led to a cabal of angry young men, humiliated by her refusal of them, they in turn spitefully reported her to the Roman authorities, pointing to her Christian commitment as the reason for her rejection of their proposals.  This in turn led to her arrest and the pressure brought to bear on her to abjure her Christian faith, which she steadfastly refused to do.  And from this situation came torture inflicted on her, and then her decapitation.  She was no wilting wallflower, nor a weak and lost lamb.  And, in this role too, she serves as an admirable example for the newly vested archbishops, some of whom may, like her, be called to suffer for their defense of the faith.  Like Jesus in today’s gospel, Who could not turn away from those at His door seeking His help in their need, she seized the opportunity to help others, such as ourselves, by her example of steadfastness and determination at times of pressure.  In this she was more like a lioness than a lamb.  And so we pray:

-for the strength to abide by our faith convictions/for the newly installed leaders of our nation/for a growing movement toward church unity/for the newly vested archbishops throughout the world.