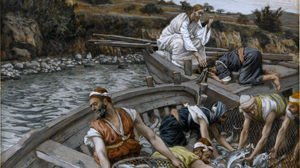 One of the thrilling but usually unappreciated occurrences of commonly experienced on our city streets Is watching the driver of an 18 wheeler back his truck into a narrow alley, when traffic must come to a standstill as he skillfully threads his large vehicle off the narrow street on which he finds himself, with parked cars lining either side of the two-lane street, and other cars impatiently lined up either way blowing their horns at the truck-driver, as he deftly maneuvers that hulking piece of equipment into its proper place in the alley.  This is an urban masterpiece, usually going unrecognized, but certainly deserving of applause.

Turning our lives around is similar to this achievement, and is the centerpiece of our biblical readings today.  It relates to the accomplishment of the prophet Jonah described in our first reading today, trying to back the people of Nineveh off the course their lives have taken, and onto the straight and narrow way that Jonah the prophet was promoting as he roamed the narrow streets of Nineveh and preached to the people there about turning their lives around.  And he was hugely successful, even though like the truck-driver who had to deftly avoid cars parked along each side of the narrow street, to a cacophony of noisy horn-blasts, as he maneuvered his huge truck backward into the narrow entranceway of the alley—much like Jonah’s hearers being corralled by him all the way up to the entranceway into heaven.  Of course, they will have to turn their lives around in order to pull off this maneuver.

St. Paul must have felt like that truck-driver years later, after the exploits of Jonah, when he, Paul, had to inform his converts in Corinth, Greece, that they’re going to have to live their married lives differently from the way they had been doing, or handle their disappointments less sadly than they had been doing, or control their expressions of joy when they’re happy, or treat their assets less selfishly than was their custom.  After all, the truck they’re doesn’t belong to the driver.

And the same message reached the ears of Simon Peter and his brother Andrew, even before Paul heard it.  They probably led a frugal life living off their catch for the day so when Jesus passed by, He seemed to offer them (and James and John as well) an opportunity they couldn’t resist, and so they accepted it, but becoming companions of Jesus was a long way from fishing the Sea of Galilee, and they had a lot of learning to absorb, like a new truck-driver, before leaving their fishing boats behind and following along behind Jesus.  This must have become more and more challenging as they watched Jesus run into more and more opposition, just as the trucker must have found out, that travelling the straight and narrow of the highways was easier than backing the truck into a narrow city alleyway.

In all of these examples we hear of the often arduous tasks before us.  But we also see that they can be successfully handled, whether by a Jonah, or the Church in Corinth, or by Peter, Andrew, James and John.  Or, by a good truck driver.  We must take it slow and easy, and disregard the horns.