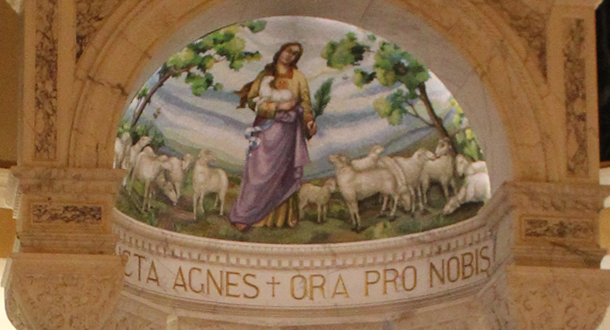 In our Passionist Parish church of St. Agnes, in Louisville KY, we have a beautiful edifice about 90 years old, that has kept up its appearance over its nine decades of existence.  It features a mosaic in its cupola over and behind the main altar, showing a teenage girl with several grazing sheep, as if she were their shepherdess.

It is an appropriate artistic piece since “Agnes” in its English spelling deviates by only one letter from the Latin “Agnus”, the latin word for “lamb, sheep”, and so the linkage between the teenage Agnes and sheep is clear enough to need no explanation. There is no suggestion here that she was a shepherdess.  But there was something about the girl and that particular animal, the lamb, to suggest why they are linked together.  For Agnes was apparently an attractive girl, and several young men had their eyes on her as an ideal wife.  But when they approached her with that offer, she steadfastly rejected their offers, for she wanted to devote her life totally to God.

Rebuffed in this fashion, her suitors approached the emperor, Diocletian, to intercede with her on their behalf, so he was anxious to persuade her to marry one of these suitors, which would then stand him in good stead with one of these wealthy suitors, but she was adamant in her refusal, and Diocletian, not used to being refused when he made requests, proceeded to have her executed.  And so she became an early martyr of the church, and so revered in the early history of the church that she gained the honor of having her name inscribed in the most sacred part of the mass (the canon for the first formulary).

It was the combination of her youth, her appeal and her tenacity in the face of torture that endeared her to Catholics over the centuries (she died in the early part of the 4th century), and that recommends her to our own veneration of her even today.  She not only exhibits an extraordinarily strong faith in the way that she died, but she also illustrates how God can work within each of us, to make of us examples of living the faith, not just as a display of our own strength of character, but, even more, of how God comes to our assistance in times of need.  Especially in this present time, when we stand in need of examples of strength of character and of virtue, we can recall Agnes and her commitment to the faith under duress and persecution.