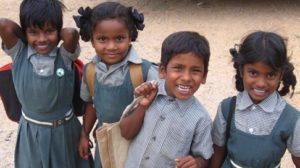 Do you ever wonder what Jesus was like as a kid?  I do.

I wonder if he walked around in flowing robes blessing people.  If Mary and Joseph ever ran out of food, did Jesus just miracle up all the wine and fish and bread he wanted?  When one of his buddies hurt himself in the playground, did Jesus touch and heal the sore?  And in school, when asked a question, did he answer in eloquent and perfectly crafted parables?

Or, I wonder if he was the Class Clown, like me?

I imagine Jesus had to learn to walk, like the rest of us.  He probably made mistakes growing up.  Maybe he lost some friends, and even had to deal with human emotions and fears.  I can hardly begin to understand what he must have had to process as he himself began to understand who he was, and what he could do, and what he was going to have to do.

He must have had a hard time accepting who he was, and his mission.

Today’s Gospel picks up just after Jesus spent 40 days in the desert.  He was tempted to renounce his relationship with his Father, but he remains faithful, and comes home renewed.  He reveals himself to the people who know him best.  They’ve seen him grow from that little guy learning to walk and making mistakes, and now he’s saying that he’s the anointed one of God.

I’ll bet they all had a hard time accepting who he said he was, and his mission.

There’s quite a foreshadowing of Jesus’ end of life in today’s Gospel.  It begins with people praising him and being amazed at his speaking and depth, but ends with them filled with fury, taking him to the top of a mountain to “hurl him down headlong.”  First loved and accepted, but then pushed to his death.  Those who praised Jesus on Palm Sunday were the same people that would scream “Crucify him!  Crucify him!”

And yet, even fully knowing what would happen, God still pursued us.  He sent his son as one of us to reach out, to call us home, even though he knew we would throw him off a cliff.

Such love.  Such amazing love… to hold out a hand of care and forgiveness even though those very people would slam a spike through it.

Pursuit.  Chase after.  Hound.  Dig for.  Leave no stone unturned.  Do whatever it takes.

How has God pursued you?

How have you tried to throw him off a cliff, headlong?

What was it that led you to finally accept God’s hand reaching out to you, waiting for you?

And, how have you been God’s hands, reaching out to others?

The refrain of a pop song, which was recorded by the artist Richard Marx, titled “Right Here Waiting,” says it pretty well:

Wherever you go,
whatever you do,
I will be right here waiting for you.

What a perfect description of God.  All we have to do look, listen, and be God’s beloved.

Paul Puccinelli is Director of Liturgy & Music at St. Rita Parish in Sierra Madre, CA, and a member  of the Retreat-Team at Mater Dolorosa Retreat Center.