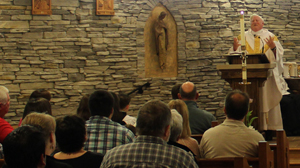 Today’s Gospel selection features John the Baptist and two of his disciples meeting Jesus as he walked by – “the Lamb of God”.  This encounter led to Jesus’ invitation to “come and see” where he was staying – and ultimately, that first encounter with Jesus led to lives of dedicated discipleship.

Over the centuries countless women and men have responded to Jesus’ invitation to “come and see”, to follow him by lives of selfless service.  One such 18th Century American woman-disciple is honored today:  St. Elizabeth Ann Seton…the first American-born saint.

Drawn by Elizabeth’s faith and fervor, a group of young women gradually joined Elizabeth Ann in her approach to education and Christian life.  In 1809 they formed the American Sisters of Charity, following the rule of St. Vincent de Paul; later they help found other schools and orphanages.  By the time of her death on January 4, 1821, the community had expanded their valued ministries as far west as St. Louis and was involved in some twenty schools and orphanages.

Elizabeth Ann Seton was called by God to help build up the Church in her day.  As noted in today’s Gospel, Jesus drew disciples to himself and began the Church; Elizabeth Ann joined those early disciples in saying “yes” to Jesus and working tirelessly to build the Church, especially among those on the fringes of society.

The new year 2017 is upon us, and God continues to bless us with our Passionist charism as enfleshed in our holy Founder, St. Paul of the Cross, and the countless men and women who have shared in his spirit.  May we deepen our personal relationship with Jesus these new year’s days – and encourage others to “come and see” God’s love present in their lives and our world.  With St. Elizabeth Ann Seton, we pray Psalm 98:  “Sing to the Lord a new song, for God has done wondrous deeds…”