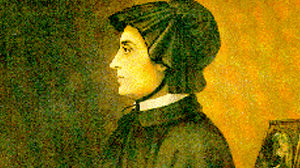 Today’s Gospel selection features John the Baptist and two of his disciples meeting Jesus as He walked by – “the Lamb of God”.  This encounter led to Jesus’ invitation to “come and see” where he was staying – and ultimately, those hours with Jesus led Andrew and, later, his brother Simon Peter to lives of discipleship and personal witness to Jesus.

That invitation of Jesus to “come and see” has touched the hearts of countless men and women over the centuries.  One such 18th Century American woman-disciple is today honored by the Church:  St. Elizabeth Ann Seton…the first American-born saint.

Born in 1774, Elizabeth Ann was reared an Episcopalian.  She married William Seton and helped raise their five children.  She was drawn to the Catholic faith by an Italian Catholic family whom she met while traveling in Italy with her husband.  After her husband’s death from tuberculosis at age 30, Elizabeth Ann freely embraced the Catholic faith – and subsequently opened a parish school in Baltimore to support her family and witness her faith.

Drawn by Elizabeth’s fervor, a group of young women joined Elizabeth Ann in her approach to education and the Christian life.  In 1809 they formed the American Sisters of Charity, following the rule of St. Vincent de Paul; later they help found other schools and orphanages.  By the time of her death on January 4, 1821, the community had expanded their valued ministries as far west as St. Louis.

Elizabeth Ann Seton was called by God to help serve the Church in her day.  As noted in today’s Gospel, Jesus drew disciples to himself and began the Church; Jesus touched the heart of Elizabeth Ann and she joined those early disciples in saying “yes” to Jesus and working tirelessly to build the Church.

“Come and see…” words spoken now to us as we head into the new year 2018.  God continues to invite us to come and see, to share in the life and spirit of St. Paul of the Cross whose birthday in 1694 we celebrated yesterday, and whose special charism motivates us as members of the Passionist family.  May we deepen our relationship with Jesus these new year’s days – and like Andrew and Elizabeth Ann Seton and Paul of the Cross encourage others to “come and see” God’s love gathering us together as Church.  Today may we likewise generously serve our sisters and brothers in their needs and their growth.