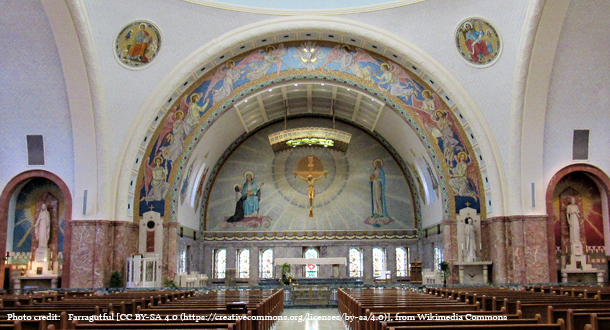 Today’s Christmas Season Gospel selection from St. John’s Gospel features John the Baptist and two of his disciples meeting Jesus as He walked by.  This roadside encounter led to Jesus’ invitation to “come and see” where he was staying – and ultimately, to discipleship for both Andrew and his brother Simon Peter.  Jesus’ opening question to the two set the scene:  “What are you looking for?”

That invitation of Jesus to “come and see” has likewise touched the hearts of countless men and women over the centuries.  Today we celebrate the life of an 18th Century American woman, St. Elizabeth Ann Seton…the first American-born saint.

Born in New York City in 1774, Elizabeth Ann was raised as an Episcopalian.  At age 20, she married William Seton and helped raise their five children.  She was drawn to the Catholic faith by an Italian Catholic family whom she met while traveling in Italy with her husband.  After her husband’s tragic death at age 30 from tuberculosis, Elizabeth Ann freely embraced the Catholic faith, followed by severe anti-Catholic prejudice from her extended family – and the grace of perseverance to live her Catholic faith and even open a parish school in Baltimore to support her family while witnessing her faith.

Elizabeth Ann’s fervor attracted a group of young women to join her in the ministry of Catholic education.  In 1809 they formed the American Sisters of Charity, following the rule of St. Vincent de Paul; later they help found other schools and orphanages.  By the time of her death on January 4, 1821, the community had expanded their valued ministries as far west as St. Louis.

The same words “Come and see…” invite us to discipleship in this new year 2019.  Our St. Paul of the Cross heard those same words; we continue to thank God for his birthday in 1694 which we celebrated yesterday.  With the intercession of both St. Elizabeth Ann Seton and St. Paul of the Cross, may we deepen our resolve as Jesus’ disciples in 2019…and may we encourage others to heed Jesus’ invitation to “come and see” as members of the Passionist Family.  As proclaimed in today’s response psalm:  God has done wondrous deeds!