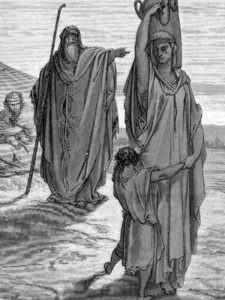 The first reading today is from the 21st chapter of Genesis, the curious story of Hagar and Ishmael.  As described earlier in Genesis 16, Hagar was an Egyptian slave woman who became the second wife of Abraham when his first wife, Sarah, proved to be infertile. In fact, Sarah gave Hagar, who served as her handmaiden, to Abraham once she realized that she herself might not be able to bear a child to continue Abraham’s offspring. (Later in Genesis, Sarah, even though elderly, will bear her own son Isaac after the three mysterious visitors come to the tent of Abraham and Sarah at Mamre—see Genesis 19).  When Hagar realizes she is pregnant her attitude to her former mistress changes and she views Sarah with contempt.  Sarah is angered by Hagar’s attitude and complains to her husband Abraham, who gives her free hand with Hagar.  Sarah drives her pregnant rival out in the desert where Hagar eventually languishes with grief and thirst.  An angel of God appears to comfort her and advises her to return the Abraham’s camp, despite Sarah’s cruelty.  There she gives birth to a son, Ishmael.  But the anger and revenge of Sarah are not satisfied.  When she discovers the boy Ishmael playing with her son Isaac, Sarah again banishes Hagar and her son to the desert.  Even though he is distressed about it, Abraham supports Sarah’s action, giving his second wife some bread and a skin of water and sending her and her young son away.

When Hagar and her son are at the point of dying from thirst, the story reaches its climax.  God hears the cries of the young boy and sends a messenger to rescue the child and his mother.  “Don’t be afraid,” the angel tells Hagar, “God has heard the boy’s cry in this plight of his.  Arise, lift up the boy and hold him by the hand; for I will make of him a great nation.”  At that moment, Hagar sees a well full of water—she and her son are saved!

What are we to make of this strange biblical story?  One thing is clear, Abraham and Sarah, our revered ancestors in faith, were flawed characters—capable of cruelty and intrigue.  Still God stays with them despite their failures—a sign of God’s compassion and understanding that is a hallmark of the Bible from the stories of the patriarchs to the accounts of Jesus’ own disciples who were also weak and capable of abject failure.

The fate of Hagar and Ishmael also illustrates God’s compassion and care for those on the margin, a motif also echoed in today’s Psalm response, “The Lord hears the cry of the poor.”  While Abraham and Sarah seem indifferent to the fate of the mother and her child they have abandoned, that is not the case with God.  God hears the boy’s cries and sends a messenger to comfort and rescue them, leading them to life-giving waters.  Later traditions would identify the “great nation” that God promises would come from Ishmael as the Arab and nomadic peoples.

Pope Francis has challenged the world not to succumb to the “globalization of indifference” and urged us to be aware of the people who suffer on the “existential peripheries”—the poor, the migrants, those despised and abandoned.  That is a message deeply rooted in the Bible as this story of our ancestors proclaimed in today’s Eucharist makes clear.