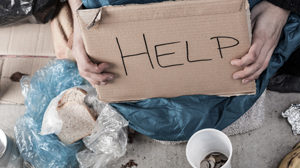 Both readings today converge to strongly proclaim the Bible’s commitment to the poor and those on the margins of society.  Amos’ searing words (Amos 8:4-6, 9-12) were composed more than 700 years before Christ but they are eerily contemporary.  This prophet, who was at first reluctant to take up the mantle of prophecy but spoke with biting zeal, excoriates those who “trample upon the needy and destroy the poor of the land.”  He mocks their intention to “fix our scales for cheating” and their willingness to sell out the poor “for a pair of sandals.”  Those who assault the poor even stoop to selling “worthless grain” in their eagerness to make a profit.   Amos has grim predictions for those so consumed by greed.  God will avenge the poor and, above all, those who seem to flourish at the expense of the poor will themselves experience a “famine”—not a famine of food but a spiritual famine in which they will not be fed with God’s Word.  They may for a while prosper economically but they will ultimately wither as human beings, losing all of their spiritual sensitivity and peace of heart.

The gospel passage today is taken from Matthew’s Gospel (9:9-13).  In Capernaum, the fishing village Jesus made his “headquarters” in Galilee, he sees Matthew, the local tax or toll collector, at his station and immediately calls him—“Follow me.”  Without hesitation, Matthew leaves his tax booth behind and becomes a disciple of Jesus—a man who was despised by his fellow citizens because tax collectors were notorious for cheating and extracting more than they should from poor farmers and fishermen.  Even more provocatively, Jesus seals his friendship with Matthew by dining in his house, along with a group of unsavory “tax collectors and sinners.”  This association of Jesus with those who were often despised in the society of his day earns the disapproval of the religious authorities.  The Pharisees ask Jesus’ disciples: “Why does your teacher eat with tax collectors and sinners?”   Why, indeed!  Jesus responds by saying that it is precisely those in need for whom he has come.  To drive the message home, Jesus cites the words of the prophet Hosea: “It is mercy I desire not sacrifice.”

There are strong lessons for us here.  The readings today reaffirm the church’s commitment to social justice—care for the poor and those in need or pushed to the margins of society.  But, the gospel passage reminds us, it is not simply a matter of not exploiting the poor or of using our resources to help those in need.  The example of Jesus tells us we are not to despise the poor or observe them at a distance, but to be with them—respecting them, accompanying them, even learning from them.  This is the message of “accompaniment” that Pope Francis has both preached and lived.