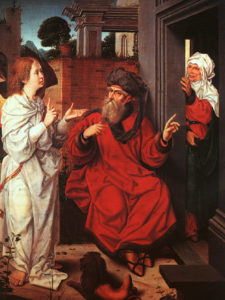 Two very different Scripture passages are found in the readings for this Monday, the first day of July.  Each reveals the marvels of the Bible.

The first is a very famous passage from the Book of Genesis.  In a previous scene, Abraham and Sarah were visited by three mysterious visitors as they camped under the Terebinth tree at Mamre, near Hebron.  These three visitors turned out to be the divine presence, a startling reality that the patriarch Abraham begins to realize.  He and Sarah offer their visitors hospitality, as is the Middle Eastern custom still, and when the meal was complete, the visitors predict that Sarah, who along with Abraham was elderly and childless, would bear a son.  She laughs behind the tent flap at such a preposterous prediction but the heavenly visitor replies: “Nothing is impossible with God.”—a phrase that will be repeated by the Angel Gabriel to Mary at the moment of the Annunciation in Luke’s Gospel.

The scene in today’s first reading follows on this remarkable incident.  The visitors accompany Abraham to the city of Sodom and Gomorrah—the Bible’s prize candidates for the most corrupt cities in the world!   The Lord speaks to Abraham in familiar terms, as if he were a trusted friend, and reveals that he is so offended by the sins of these cities that he will destroy them.  This triggers the touching scene where Abraham barters with God, seeking to quell the Lord’s anger.  The mechanism of bargaining is something very familiar to Middle Eastern cultures to this day.  Surely, Abraham says, God did not want to sweep away the innocent with the guilty!  So, what if there are fifty innocent people in the city?  God concedes he would spare Sodom if he found fifty innocent people there.  And Abraham then pushes his luck—What about forty-five?  Or even thirty?  How about twenty?  And, Abraham sensing he is at the limits, says, “Please, let not my Lord grow angry if I speak up this last time.  What if there are at least ten there?”  And God, his anger seemingly quieted by Abraham’s bargaining, agrees, “For the sake of those ten, I will not destroy it.”

As so frequently happens in Genesis, God is portrayed in very human terms.  In this enticing scene, the Scriptures both underscore the infinite power of God and, at the same time, God’s inclination to mercy and forgiveness.  As the response psalm 103 for today acclaims: “Merciful and gracious is the lord, slow to anger and abounding in kindness.”

The gospel reading for today is from Matthew’s Gospel and gives us a glimpse of the cost of discipleship.  Two would-be disciples approach Jesus, declaring that they want to follow him—the gospel definition of what discipleship means.  But Jesus’ words here and in other parts of the Gospel underscore that following Jesus requires commitment and awareness of the cost that might be involved.  Following a Jesus who gives his life for others requires a generosity of spirit and courage.  Thus the one disciple who confidently declares he will follow Jesus “wherever you go” is warned that “…the Son of Man has nowhere to rest his head,” and the other is confronted with Jesus’ demand that no other priority can match the call to follow Jesus with all our heart and soul: “Follow me, and let the dead bury their dead.”

Two very different biblical passages today, but each alerting us to the power and beauty of God and the Christian life.