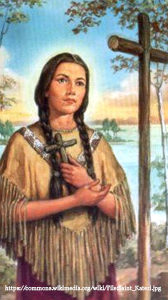 Today we celebrate the feast of a very special saint, St. Kateri Tekakwitha.  This brave young woman was born on the 17th of April, 1656, and lived only 24 years, dying in 1680.  Kateri lived in what is now a part of New York State and after her conversion settled in a Jesuit mission in an area today just south of Montreal, Canada.

For those who may be interested in the way that Kateri would have spoken her name as a young Mohawk maiden it was pronounced “Gaderi dega’ gwita.  I have always been fascinated by her story because it tells how she faced even being shunned and cast aside by her very own people in order to follow Christ upon her conversion to the Catholic faith.  Embracing the faith and being a devoted follower of Jesus cost her dearly and is a good reminder to us that it is not always easy to say yes to the Lord and to follow the Lord daily.  Kateri did and it cost her family, tribe, and physical security.

In our readings today we see in the book of Exodus the dramatic, colorful story of an unnamed woman known only as a “Levite woman” who was married to “a certain man of the house of Levi.”  Yet, this nameless woman herself was a true hero, as well.  This brave mother, completely overshadowed by the child she bore, the great father and hero of the people of Israel, Moses, was clearly someone who was courageous, selfless, and who would make any sacrifice (not unlike Kateri) to preserve the goodness and the beauty of life and God’s sacred creation.  Exodus tells us that this anonymous hero went down to the river bank and placed her precious child in a basket that was “daubed with bitumen and pitch” into the reeds of the river.  As the Lord would have it, making this drama even more inviting, it was the very mother of Moses who would be selected by Pharaoh’s daughter to nurse the child until he had grown beyond infancy!  Pharaoh’s daughter, another nameless woman in the Old Testament, was also courageous and selfless, raising Moses as her very own child.

Of course, as they say, the rest of the story is history but what a history it is!  From a basket hidden in the reeds of the river all the way to leading God’s chosen people out of slavery, through the desert, and to the edge of the promised land, Moses is one of the most significant people found in the Jewish scriptures.

Father Pat Brennan, C.P., is the director of Saint Paul of the Cross Passionist Retreat and Conference Center, Detroit, Michigan.