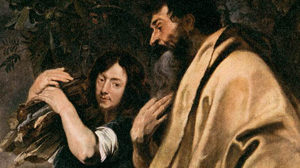 Today’s first reading takes me back in memory to Resurrection School, in East Los Angeles, the year, 1957. We were eighth graders in the spring of that year, soon to graduate and move on to high school. Our Franciscan Sisters who taught most of the grades in the school, occasionally had us produce biblical “tableaux”, brief biblical scenes, scripted and memorized, with costumes and sets, to be acted out for the rest of the school children.

Today’s reading from Genesis was the tableau we were going to perform, and I had been selected to play the part of Abraham. Our Bible History classes had already introduced us to the patriarchs, the judges, and kings of the Jewish scriptures. From my perspective, I was playing the part of an old man (I even had a glued-on beard) who was being tested by God to measure his obedience and his willingness to do what God was asking of him.

I would have to say that the situation was not beyond the experience of a thirteen year old eighth grader. It is one way that the vocational discernment process unfolds. The discernment of God’s will in one’s life always begins with recognition that my life is a sacred trust which God has called into existence from wisdom and a love which will unfold throughout my lifetime. I owe obedience to God not because of a servile relationship, but because of my conviction that God acted with purpose in offering me life, and in order to fulfill my life’s purpose, I will discern and follow God’s plan in giving me the gift of life.

Today’s first reading shows how difficult it may be in the concrete realities of life to be obedient to God’s will. In Genesis 12:1-3, God has already begun his covenant with Abraham, promising to make him the first of a great nation. How can God then ask Abraham to sacrifice his son, Isaac? Or, more broadly speaking, how can God ask something of me that seems to have no reasonable foundation?

God answers that question by casting the episode in the guise of a test, a test of Abraham’s obedience. Because Abraham chose obedience to God, the blessing first given in Genesis 12:1-3 is made more explicit and confirmed.

The model that Abraham provides is that of a person so convinced that God is guiding his life, that he could be obedient even to what appeared to be the most impossible of commands.