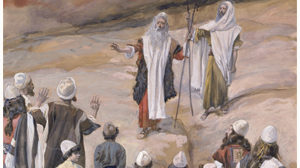 The formation of a new people or a new nation is not an easy task.  It probably has a better chance of success when it happens somewhat sporadically, almost in an unplanned way, by people somewhat fortuitously or accidentally merging together.  Certainly the success rate of this kind of development seems to be greater than that of preplanned or artificially arranged nation-formation, such as that attempted after the First World War by the victorious Allies at the time.  New nations came into being during that era, especially in Europe and the Middle East, but it has not been a raving success, such as events in the Balkans, or the Mideast, or parts of Africa, show.

Today we hear of nations-in-formation, or perhaps, more accurately, peoples coming into their own, under God’s aegis.  In the Book of Exodus, this development came about as a result of a military venture, inspired and directed by God, on behalf of the Hebrew peoples.  They had been a consortium of twelve tribes claiming a common ancestry, who left their native lands as a result of a severe famine, and travelled to the land of Egypt because rumors from there indicated the Egyptians had plenty of food to eat, and seemed willing to share it with others who were in need.  So these tribes descended upon Egypt in search of food, which was provided them, so they settled down there for the foreseeable future.  Things went well enough for them so long as one of their own, Joseph, occupied a position of prominence in the Egyptian government, but, once he died, and a new pharaoh came to power, the living conditions for the Hebrews were not as comfortable as they had been, and their privileged condition deteriorated until the point in time of which we hear in today’s reading, when the Hebrews, under their great leader, Moses, sought to escape from Egypt in a way that God would show them.

We hear today of their success in doing so: they crossed the Red Sea thanks to the remarkable intervention of God on their behalf, Who, in turn, released the pent-up waters of the sea onto the pursuing Egyptian army, guaranteeing the Jewish escape.  This was the moment when they became a new nation, God’s own people, His chosen ones: no longer twelve tribes, but one people of God under their leader Moses.  They were a new people covenanted with God as their God, Who, in turn, regarded them as His chosen people.  Thus was born a new people on the face of the earth, one that has existed to this point in time.  This new people had its own form of worship, its own sacred book, its special leadership, and a place to call its own.  All the ingredients of a new people were at hand.  Their success as a new people depended on being God’s chosen people.  He cemented the twelve tribes together.

But this is not the only way of becoming a new people, and a successful one, at that.  The gospel provides us a model of another way in today’s gospel reading.  It centers around the person of Jesus, on an occasion when a crowd had gathered around Him while He was speaking, and someone informed Him that His mother was in the crowd, with His brothers, waiting to speak with Him, giving Him the opportunity to open up their minds to the possibility of an entirely new and different way of thinking about family, and indeed about people in general.  For He raised the question: who is my mother, and, who are my brothers?  Then He opened up a new vista for His listeners about the meaning of family: family is that group of people united in doing the will of the Heavenly Father.

This is a bigger break-through into an appreciation of our relationships than that presented in today’s first reading, where a communal escape from slavery bonded the Jewish tribes together into a new family.  For, as Jesus presents it, bonding together is not simply horizontal, among ourselves, but also vertical, with God.  In fact, it is this relationship, which is one of faith, even more than the relationship flowing from a common experience, like escape from slavery, (a kind of horizontal relationship), that constitutes a new kind of family, and indeed a new kind of nation: a new people.

So even more than a shared bloodline or shared history or shared landscape, it is a shared relationship to God, in Whom we believe and Whom we seek to serve, that makes a people truly bonded together, strongly enough to withstand any difficulties that develop, whether from outside or inside.  For it is a shared faith.