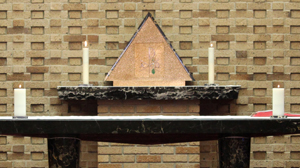 We celebrate the value of ritual today.  Ritual itself is celebration, so we are celebrating the value of celebrating.  And most of us appreciate why we do this: ritual adds pomp and circumstance to a series of movements whose repetitiveness otherwise generates boredom in onlookers.  An example of this is a marching military parade.  The rhythmic cadence of coordinated marching has its own beauty, whether accompanied by musical instruments or not.  But even in this instance there can be too much of a good thing.

Another familiar venue for the performance of ritual is religious ceremony, which in the case of Roman Catholics and Greek Orthodox, among others, is prominent.  Admittedly, the military version of ritual exerts a stronger attraction on most observers than religious cult does, but the latter has its strong points that merit our attention.  This is evident in our biblical readings today.

For instance, we are reminded of the Passover meal ritual at the center of the Holy Thursday Eucharistic meal.  In recent years it has regained something of its earlier fascination for participants in this ritual.  Part of this carries over from the original Passover meal vividly described in the biblical book of Exodus recalling how God directed every Hebrew family in Egypt to procure a lamb for itself, slaughter it, and make a meal of it to be consumed in the course of the evening.  This has come to be known as the Passover meal, because the avenging angel of death, sent by God, was to pass over every household whose entrance way is daubed with the blood of a lamb just recently slain.  But any household in the land of Egypt that failed to mark its doorway in this manner would be visited by the angel of death.  Certainly the people of that era were mesmerized by the power of this ritual.

A version of this practice has passed over into our Paschal celebration of Holy Thursday.  Obviously we don’t slaughter an animal, and then spread its blood over our door lintels, but we do use narrative and song recalling the message of the original paschal meal: that it is salvific, saving us from the power of evil because we have access to the eucharistic blood of Christ, vastly superior to the blood of a lamb  employed by the ancient Jews this self-same evening.  So this is not a dead ritual but a life-giving and saving one.  On Holy Thursday we should resonate to this as we do to the rhythm of marching feet of military personnel.

A similar situation is found in the gospel narrative today.  Again, it tries to move us out of the dry archives of history to enliven our interest in another ritual practice in which we Catholics engage: we keep our consecrated hosts in the safe interior of the tabernacles that adorn our altars.  We are careful, cautious and protective of the hosts that have been “consecrated” at a mass, a number of which often remain, following the mass.  So we carefully place these within the tabernacle, in a way that somewhat corresponds to the ancient Jewish practice of its priesthood protecting what they call “the bread of offering” within their temple.  While their bread does not correspond to our notion of consecrated hosts, it did enjoy the same kind of respect, which is provided by their priests.  It is this bread to which Jesus refers today when He defended His hungry disciples shucking corn in the fields to satisfy their hunger on a Sabbath day—a forbidden activity as the Jews practiced the Sabbath.   Jesus justified His disciples doing this, recalling how the great king David defended his hungry followers, similarly criticized, for eating the holy bread preserved in the temple area, and doing so on the Sabbath.  In each case we see a present need (the hunger of Jesus’ followers and of David’s soldiers) in dialogue with ritual rules to show that they don’t necessarily get in the way, or prove useless, but enable us to show our reverence for things that matter, while still adjustable to our needs.  So ritual is not necessarily archaic or useless.  It provides us access to an important part of our lives, but it can be adjusted when there is a need to do so.