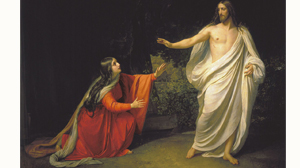 Today, we may have called her a “member of the inner circle.”  Back then, it would have been at the very least awkward and probably more like unheard of.   The young traveling rabbi had caught her attention, then changed her entire understanding of life and of God and finally called her to be his disciple.  She followed Him wherever He went.  She listened whenever He spoke and taught.  She allowed His teaching to become second nature within her heart and mind so that her life choices now reflected His mind and heart.  Then she began to spread the word about Him among others.  All of her hopes and dreams based upon a divine promise thousands of years old were now focused in Him.

Then it happened.  Everything was trampled underfoot into the ground by false accusations, political intrigue, and a weak governor who condemned him to death on a cross.  Jesus was dead.  For Mary, grief had not yet given way to doubts and fears.  She was simply overcome with sadness remembering Jesus as He was.  Even when she and her companions found the empty tomb, she remained at the tomb paralyzed by grief and yearning to have Jesus back as she remembered Him.  That sad, wishful thinking would never come to pass.

Instead something amazing took place.  Mary encounters the Risen Lord but believes Him to be the gardener.  At this moment, Mary is still looking for Jesus as He was, even if it will only be His dead body.  When Jesus calls her by name, she recognizes the mind and heart she recognized so well along the way.  Jesus must help her understand that the Jesus she knew only weeks before is no more.  Jesus is now the Risen Lord of heaven and earth.  The old order has passed away and new life has come into being through redemption born from a cross.  All is re-created; all is new; all is now one in the Risen Lord.  It is this moment in Mary Magdalene’s life that helped St. Paul to say, “So whoever is in Christ is a new creation:  the old things have passed away; behold new things have come.”  (2 Corinthians 5:  17).

Mary’s great gift and virtue in this great moment which changed everything is her willingness to let go of the past.  Jesus insists that her memories of the way Jesus was would get in the way of her understanding who He is now as the Risen Lord.  Only when she let go of the past was she able to accept her own re-creation from a follower to a powerful witness to the truth of the Risen Lord.  Only then does she accept her saintly role of becoming a disciple who announces the continuing presence of the Risen Lord and His gift of new life won through the power of His sacrifice on the cross.  Mary Magdalene is the first witness to this foundational reality of our faith.  As such, she continues to preach to us daily about the mind and heart of the Risen Lord, about His constant care and concern for His people, about His abiding presence to us in so very many ways, about His great gift of redemption and our sharing in His victory over sin and darkness.  She helps us to understand our freedom to live as children of the Father who always live in the light who is Christ.

As such, Mary Magdalene remains for us a beacon of faith, helping us to always and in every way to recognize the Risen Lord in our lives.