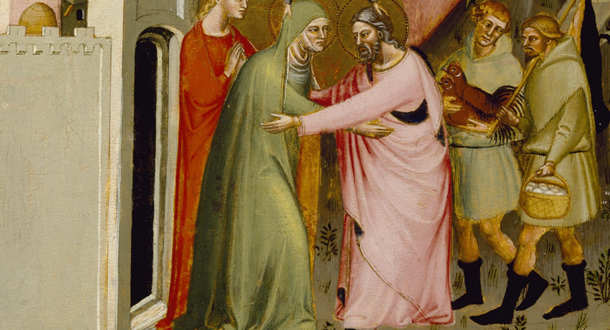 Memorial of Saints Joachim and Anne, Parents of the Blessed Virgin Mary

To make time pass while traveling I have been choosing to listen to some favorite podcasts. One of my favorites is the TED Radio Hour by NPR. The one I listened to yesterday was all about the five senses. The story told by neuroscientist David Linden especially caught my ear (pun intended!).

He gradually went blind beginning in his early teens. By age 25 he was completely blind. But in his story, he says that what he thought was a proverbial death sentence was actually a great blessing. “In going blind I gained my vision,” he said. He believes that he can now envision what his vision often obscured. He went on to graduate from Harvard and earned advanced degrees in neuroscience.

Today’s readings are all about the senses. So often we choose to see what we want to see and ignore what we don’t. It is our human bias. Our constructs—the way we see the world—keep us safe, so we think. While I would never say that I hope to go blind so that I can “see,” I can point to two moments in my life where my eyes were opened in new ways.

The first was went I went to live in the Philippines for two years, living among the urban poor of Manila. The second was when my brother was shot and killed on the streets of Washington DC. Not a day passes when I do not draw on what I learned from these experiences. In each instance, I learned to see myself in a different light and was forced to choose more intentionally how I was going to live my life.

Let us ponder these words of Jesus in today’s Gospel and recall moments when your eyes were opened just a bit more: