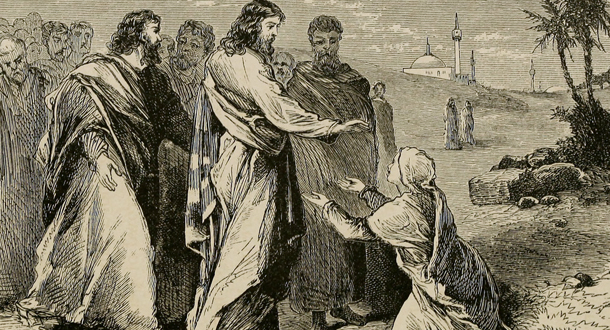 Today’s Gospel jars me from the temptation to accept a private, Jesus-and-Me spirituality.

At first reading, this section of Matthew’s Gospel appears to be to be two amazing miracles by a compassionate Jesus. But a deeper reading of the context and culture, however, reveal how prophetic the words and deeds are. And the challenge they present to me.

The Palestinian world of Jesus’ time was an honor culture. Men, to be accepted and have influence, focused on defending their status and entitlement. Women who stepped from their limited, powerless roles would be instantly shamed.

In this engrained patriarchal culture, women never asserted themselves socially, especially not in public life. They had no money or property, let alone influence.

For a woman who had been sick for 12 years to interrupt Jesus’ journey to cure the daughter of the male “official,” who enjoyed status and power in the town, was unthinkable.

Instead of publicly pleading with Jesus, she clandestinely came behind him and touched the tassel of his cloak, perhaps trying to avoid being shamed for asserting herself.

When Jesus realized what she had done, he slashed through the cultural mores and did the opposite of shaming her. He en-couraged her and raised her status with a simple wish: “Courage, daughter!” His strong words and the cure soundly condemned the unjust standards of his day. Simultaneously he put the powerless, ailing woman on the same level as the “official” and his daughter.

He recognized immediately the class-less, status-less, power-less essence of our relationship with him: faith.

He then moves on to visit the sick girl. Based on the faith of her father, not his position in the community, he dismisses the ridiculing crowd and raises the dead child.

Praying over these two stories I ask myself these questions:

*How strong is my faith in Jesus?

*Do I trust his wisdom over mine?

*Do I believe, by surrendering everything to Jesus, I will find fullness of life?

*What social expectations do I carry with me that keep me from freely giving all to Jesus?

*What social barriers to justice and equality do I work to dismantle?

This prayerful examination of conscience can shake my serene “Jesus-and Me” understanding of religion. As a result, I am free to be bold in every act of love and every effort to build a just world.