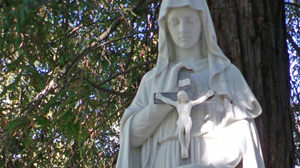 Emily Dickinson calls hope the thing with feathers. Like a singing bird it keeps spirits up in the chill, the dark or the storm. If I associate hope with a bird it would be because they flit around; they are here then they are there.

I received an email from a friend saying that her brother was on his way from Rome to Bologna to see a cancer specialist. The glioblastoma tumor was increasing and treatments ineffective. A second email two days later said that the doctor found no cancer, only a hole in the brain(!), but no cancer. She could not describe the joy of her brother and family on the train ride back to Rome. What a difference between two emails. The first asked for prayers that spoke of hope, but the ‘feathered thing’ looked a bit irrelevant, not at all up to a seemingly impossible task to me. In the second email ‘hope’ was not to be found, only celebration. Hope had been there and then flitted away.

Today the Word of God calls us to hope. The prophets offer hope despite some very hard word. Matthew overflows with hope- what you hear in darkness, speak in light; do not be afraid of anything; do not be intimidated but have hope.

The Passionist community today celebrates a feast observed from the time of its founding, ‘Mary, Mother of Hope’. Thomas Struzzeiri, CP, promoted this devotion. He carried a picture of Mary, Mother of Hope on his parish missions. Soon this picture was found in the rooms of the religious. The devotion invites all to ask Mary’s assistance in their spiritual need, and to see her as model and support of our hope.

Blessed Dominic Barberi, CP offers a reflection on Mary as a model of Hope: hope is an anchor that keeps the ship of our souls safe on the stormy sea of a troubled world. It enables us to confidently expect eternal life and the aids that lead to it. Since Mary possessed this virtue to an heroic degree she is appropriately called ‘Mother of Holy Hope’. Barberi gives a picture of hope from the Song of Songs: ‘who is this coming up from the desert, leaning upon her lover?’ Mary hoped on Calvary, when the disciples fled in fear, in the persecution of the infant Church. She remained firm in the midst of what seemed disaster and supported those who turned to her as to a mother. She encourages the weak, lifts those who fall and urges the strong to ever greater trust. Mary has not resigned from such maternal service in our day.

Dominic Barberi was a theologian and teacher, who went to England with hopes of enabling dialogue and union between the English Church and Rome. He suffered much from cultural and religious differences, and did not see ‘his hope’ realized. But he had a unique gift, a surprise: welcoming John Henry Newman into the Roman Church.

On June 27 as my friend’s brother went to see the doctor in Bologna. In her second email he shared with me her prayer, ‘that my mother, who had recently died, would accompany Mary, Jesus mother, to plead before her son for the recovery of my terminally ill brother’. In my prayer I had forgotten that Mary is the Mother of Hope. My friend did not!