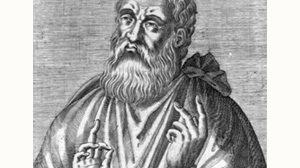 Today is the feast of St. Justin, an early Christian martyr who lived in the second century.  He was a brilliant philosopher and a stout defender of the Christian faith—a stance that ultimately cost him his life.

The readings for today are part of the ordinary weekly cycle but their content makes us think about the cost of Christian discipleship.  The gospel story of the workers in the vineyard who abuse the emissaries of the owner and finally even kill his son—a harbinger of Jesus’ own suffering and death—is familiar to us.   But we seldom hear readings from the Book of Tobit like the one we have today.   This unusual book was probably written sometime in the second century before Christ,  and meant as a story of encouragement in the wake of Alexander the Great’s conquest of the Middle East, which left the Jews of the region living under foreign rule.  The author of Tobit casts the story much earlier, when Israel was in exile due to the Assyrian invasion in the 7th century B.C.  Tobit is a devout and faithful Jew living in Nineveh with his family.  In the quaint scene depicted in our reading, Tobit is enjoying a “fine dinner” celebrating the feast of Pentecost.  Reflecting Tobit’s goodness, he tells his son Tobiah to go out and find a poor man with whom Tobit can share his feast.  However, the son returns with a very different report—he has discovered the body of a fellow Jew who had been executed and left lying in the street.  In accord with Jewish piety, Tobit immediately leaves his dinner table and goes to bury the man—earning the wrath of his neighbors who preferred that this executed man would suffer the indignity of not even being buried.

As the story of Tobit continues—beyond the passage we have today—we learn that despite Tobit’s goodness he continues to suffer calamities in his life, including being blinded (from bird droppings while he is asleep!).  A parallel account in Tobit is that of the beautiful Sarah who has seen seven of her newlywed husbands in succession die on their wedding night!

Ultimately the story of this righteous suffering receives comfort and relief.  The Angel Raphael (the name in Hebrew means, “God heals”) works to heal Tobit’s blindness and to break the cycle of death that engulfs Sarah’s life (she will successfully marry Tobiah, Tobit’s son!)—all through the healing powers drawn from the entrails of a fish! [Read the whole book to get the amazing details!]

Like ourselves, the original readers of this great biblical fable may have chuckled at some of its outrageous features.  But the underlying message contains sober truth.  Living a devout and righteous life does not necessarily protect one from acute suffering.  I think of the innocent Christians of Iraq and Syria who are suffering terrible persecution and death itself at the hands of hate-mongers who use the cover of religion for their treachery and violence.  All of us can experience suffering of a less dramatic sort that makes us ask where is God at our time of need.

But the book of Tobit in its winsome way, also reminds us of the deepest wellsprings of our faith, particularly in this Easter season.  Ultimately, God will heal us and bring us home, despite the mystery of evil and the suffering it can inflict on us.  We pray today that, like Tobit and Sarah, like Justin Martyr and all of the contemporary unnamed martyrs who suffer around the globe, that God would send the Angel Raphael, God’s own comfort, to sustain us.