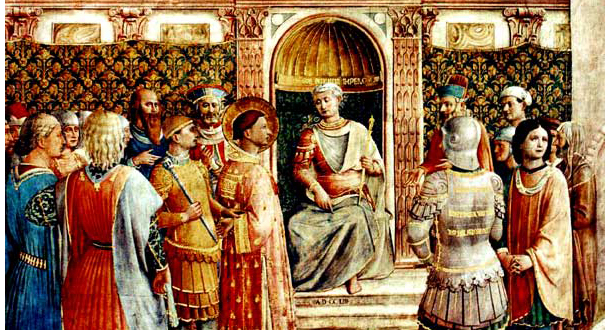 Several years ago, I was invited to give a series of presentations on Scripture in the Diocese of Arusha in Tanzania.  During my stay, one of the Spiritan Missionaries took me to visit some of the remote mission stations on the outskirts of the diocese.  The heavy winter rains turned the unpaved roads in the region to a sea of mud, so travel to these areas was restricted to the dry season.  By necessity, the opportunity for the Spirit missionaries to visit some of these regions was sometimes only after many weeks of absence.  We visited one small village where the missionary wanted to see how a young man (named Paul, by the way) was doing who had only recently expressed interest in Christianity.  To his amazement, he learned that this very new convert was away preaching the gospel in the surrounding villages.  Since the man had had very little instruction, the priest wondered what exactly this Paul was preaching!

I thought of that story when reflecting on the first reading from the Acts of the Apostles assigned for today.  We are introduced to Apollos, also a recent convert and an eloquent preacher from Alexandria.  He was full of zeal, but his knowledge of Christianity was very limited—he had not even heard of Christian baptism!  Fortunately, Pricilla and Aquila, the couple who worked with Paul in Corinth and became valuable fellow missionaries with him, were able to “take him aside” and instruct Apollos “more accurately” in the Way of God.  With their gracious assistance, Apollos would go on to become a powerful missionary in his own right.

Today the Church remembers Justin, who was martyred in the 2nd century and left a strong impact on Christian memory.  Justin was born in Samaria, the Jewish region situated between Judea to the south and Galilee to the north.  The Gospels remember Samaria where Jesus encountered the Samaritan woman at the well, and the Acts of the Apostles notes that in the early years of the church Christian missionaries from Jerusalem proclaimed the gospel there.

Justin became a Christian after several years of trying to find meaning in Greco-Roman philosophy, but never with full satisfaction.  By chance, Justin encountered an elderly Christian whose wisdom and fervor convinced him that the truth he was earnestly seeking could be found in the Scriptures and in the person of Jesus Christ.  Later he would see that the quest for truth on the part of these ancient philosophers was also worthwhile if incomplete.  Justin became an ardent teacher of the Christian faith, stressing its truthfulness and beauty.  He and some of his pupils met martyrdom in Rome around 162 A.D.

The experience of Apollos and Justin remind us how much we all count on each other to help us be genuine Christians.  Today we might all think back to how the example and encouragement of good people and faithful believers have influenced us and helped us find the truth that counts.