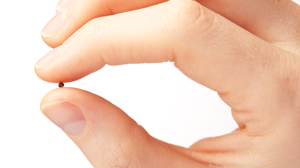 With a rainy start to the day I headed out in my car to a local organic food store to see if they had seed packets.  In this part of the world where meats and fish are plastic wrapped in trays, where grains are boxed and labelled on the shelves of a grocery store I felt a pull this morning upon reading today’s Gospel to touch something of the world Jesus speaks.  There on a revolving stall in alphabetical order I found a small packet of mustard seeds.

For years I have sat in the pews listening to this story. Yes, a tiny seed.  Yes, it grows into big things.  But this morning I chose to actually hold one singular speck of a seed in my hand as a prayer.  A question.  A need.  A hope to understand.

A mustard seed, tiny, insignificant, so easily lost, rolling around my hand with nothing but the steadiness of my palm to hold it in place.   There is nothing about this little black speck that speaks of the life and abundance of all that will spring forth when it is sown in the ground. Taking root.  Growing.  It is mystery.  It is unseen and even unimagined from my own sight.

When I first read Mark 4, the line that surprised me was the last.  “He spoke the word to them as they were able to understand it…but to his own disciples he explained everything in private.”   What are we to make of those times that Jesus seems to extensively reveal something and yet it is left to be discovered. Those moments that leave a reader with the seeds of mystery and questions of something deeply revealed and yet, not spelled out.

Jesus wrote on the ground when the woman was judged to be stoned but we are never told what he said.  On the road back from Emmaus we are told  that “he explained to them what was said in all the Scriptures concerning himself.”  And yet we were not told the specifics.  The mystery was only revealed to those who travelled diligently, faithfully, intimately, daily devoting themselves to His mission as it opened and was revealed along the way.

The first disciples stepped off their boats opening their hearts to the words of Jesus sensing something greater.  All along they were asked to open their hearts in deeper and wider ways to sprout a new way of knowing and being rooted in His Life and Word.  And then to move out into the world to share the fruits of all that was revealed.

The Alleluia today proclaims, “The seed is the word of God, Christ is the sower.”

As I hold this small seed may my trust open with a deeper faith in the unseen, to believe in the power and glory of God that will rise when we gift Christ the soil of a receptive and open heart.

M. Walsh is a retreatant and friend to Mater Dolorosa Passionist Retreat Center and the Passionist Community.