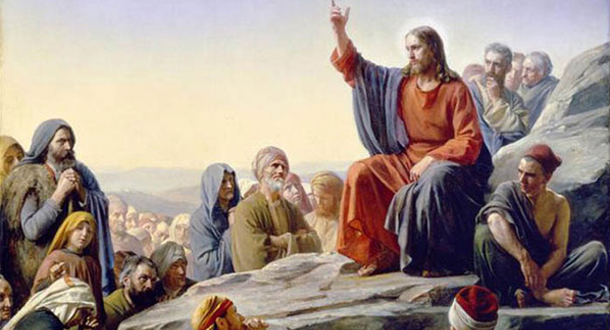 After having given his disciples the Beatitudes, Jesus continues to share the values of discipleship.  He speaks of the process that moves from Anger to Murder, Lascivious glance to Adultery, Infidelity leads to divorce, and how swearing moves to Oath taking.  Jesus is especially concerned with taking an oath, truthfulness.

In Hillel there is a whole treatise on the seriousness of taking “Oaths”. To take an oath is to ask God to witness something between two or more persons.  To take a vow happens when a person asks God directly to be a witness to a situation. To avoid calling on God to witness a transaction Judaism created substitute words, e.g. “By Heaven,” “By Earth”, “By Heaven and Earth,” “By Jerusalem,” etc.

Jesus encourages disciples always speak the truth.  Let their words by “yes” or “No.”  In 1989, in his letter to the laity St. Pope John Paul II mentioned that the three things were of utmost concern to the people of the world.  First, is whether their children will have air to breath, water to drink, and food to eat.  Second, he was concerned with people’s ability to tell the truth any longer, and the Third, whether people can keep promises.  If we cannot do these things it is the end of conversation and ultimately the end of civilization.

There is a story told about Frank Lloyd Wright, one of the foremost Architects of our times.  Once he was in court when he was asked by the Judge, who he was?  He responded something to this:  “I am the greatest architects in the world.”  When he and his wife, Oliviana left the court room, his wife told him he could have had been a little more modest about his achievements.  He replied to her, “Oliviana, I was under oath! I had to tell the truth!”

Jesus instructs us that in matters of great importance we have to speak the truth.

Scripture scholars tell us that this portion of Matthew’s gospel is unique to Matthew.  The words are so lucid, precise, simple, and direct we can say that this passage and these words are the original words of Jesus Himself.  If we speak with more precision in our choice of words and truthfulness it would be a much better world in which to live.