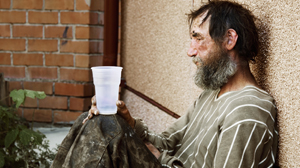 St. Paul tells the Corinthians, “whoever sows sparingly will also reap sparingly, and whoever sows bountifully will also reap bountifully.  Each must do as already determined, without sadness or compulsion, for God loves a cheerful giver.”  In today’s gospel, Jesus tells us, “When you give alms, do not blow a trumpet before you, as the hypocrites do in the synagogues and in the streets to win the praise of other.”  Almsgiving must flow naturally from the heart of the Christian.  It must be free of ego consciousness.  It is like love and compassion jumping out of my heart into the heart of one in need.

I recently heard a story that illustrates what this teaching of the Scriptures is all about.

Many years ago, in the heyday of the circus, a father and his teenage son were standing in line to purchase their tickets to get in.   One family was in line in front of them.  There were eight children in the family, all below the age of twelve.  By the way they were dressed you could tell they did not have a lot of money, but their clothes were neat and clean.  The children were well-behaved, all of them standing in line, holding hands, two by two, excited as they could be about being at the circus.

The mother was standing next to her husband, holding his hand.  She too was excited about being there.  The father proudly requests tickets for each person.  When given the total money needed, you could see a moment of panic go across his face.  He counted his money and realized he did not have enough.  The cost was more than he thought it would be.

The father of the teenage boy standing behind this family, realized what was happening and in no time flat, he reached into his pocket and pulled out the twenty dollar bill he had, crumpled it up and threw it on the ground next to the father attempting to purchase tickets for his family.   He then went forward and picked up the bill and handed it to the father of eight, telling him that he must have dropped the money when pulling something from his pocket.

The father of the large family reached out and shook his hand, taking the twenty dollars, saying, “Thank you, thank you sir.  This really means a lot to me and my family.”

The father and his teenage son, without any money, got in their truck and drove home.  They did not get to see the circus but they received a joy of heart that only the angels know.  Can you imagine the lesson that father taught his son on how to give alms.

Fr. Blaise Czaja, C.P. gives parish missions and retreats.  He is a member of the Passionist Community in Citrus Heights, California.