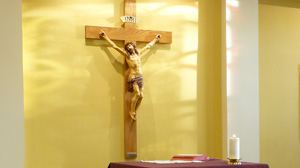 There are two very dramatic readings before us today. The first tells part of the story of the Apostle Paul’s denunciation to the Roman Procurator of Judea, Porcius Festus; and the second is the more familiar “interrogation” by Jesus of Peter, “do you love me?”

Both accounts portray the difficult terrain that a disciple of Jesus must traverse in the process of living the Gospel in an unaccommodating world.

We all remember how Peter’s lowest moment in the narrative of the Passion comes when he denies being a member of Jesus’ associates, and even of knowing Jesus personally. The denials of Peter while waiting in the shadows to see what will happen to Jesus as he is under Herod’s interrogation come back to haunt him when Jesus takes him aside, after the post-Resurrection appearance at the Sea of Galilee, and he is asked three times whether he loves Jesus.

While we may wish to see this as a call of Jesus to repentance, it is first of all a sign of Jesus’ redemptive power already at work. It is not the same Peter who stood in the shadows of the courtyard, fearing for his own life that responds to Jesus’ three-fold question. It is a renewed and exuberant Peter who has already felt the reconciling grace of Jesus’ resurrection. This sequence of events: Peter’s failure and betrayal; the sacrifice of Jesus on the Cross; the Resurrection; and the experience of the Apostles and Disciples of Jesus’ presence among them…tell us that Jesus is not one to exact a price for our redemption. Jesus gratuitously and with his own initiative goes out to meet the Apostles, and Peter most of all. He does not impose a period of penance or set a standard for meriting forgiveness. Jesus looks Peter in the eyes and simply asks, “do you love me?”

What an example for the Church today; indeed, for each one of us, today! No matter our fault or failure, Jesus looks us in the eyes and simply asks, “do you love me?”

In the first reading, Paul is confronted by accusations which do not fit into the Roman scheme of justice. He is accused by religious leaders of religious crimes; but the accusers have brought him before the Roman Procurator, Festus. Surely, Festus will not be swayed by the religious intrigues of this subjected nation of the Jews. When asked if he chooses to stand trial in Jerusalem, Paul invokes his right as a Roman Citizen to be tried in the Emperor’s court. Whereupon he is held in custody until he can be sent to Rome, a journey that will be fraught with danger to life on the sea and protracted periods of safe-harbor as they await the passing of the storms of the season.

We, like Paul, are citizens of two worlds, a Pharisee to the Jews and a Roman citizen to the Romans. Like Paul, we witness to Christ in the daily occupations of our lives. This may be, for most of us, the usual degree of challenge we face in our discipleship. Will I be able to witness to Christ in today’s duties as parent, as citizen, as neighbor, as parishioner?

Today, when Jesus gazes into our eyes and asks, “Do you love me?” What answer will I be able to give in response?