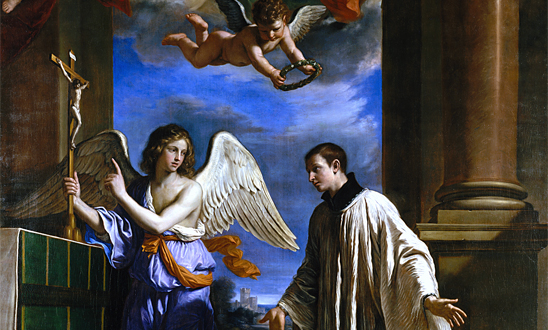 Today we celebrate the memory of a remarkable young Jesuit named St. Aloysius Gonzaga.  The elevation of Aloysius to the “honors of the altar”, so to speak, was the beginning of a trend in the church that has continued into our own time.  He died as a young man, 23 years of age, and, ever since then, the church has grown particularly interested in other young people like him, both men and women, who have caught the eye of the church for their remarkable holiness.  Prior to Aloysius, most of those raised to the honors of the altar were men and women who had lived long enough to achieve some remarkable feat, showing their holiness of life.

Aloysius came from a wealthy Spanish family, and, at an early age, decided to join a religious order, in this case, the Jesuits.  The Jesuits themselves were a young religious order at the time—just 34 years since their beginning.  But in a remarkable sequence of young saints (such as John Berchmans and Stanislaus Kostka) the Jesuits attracted much attention for their success in attracting such outstanding young men to their community.  And ever since then, the church has been sensitive to the remarkable lives lived by such young people.  The Passionists too have produced some outstanding young saints such as Gabriel Possenti, Gemma Galgani and Maria Goretti.

Of course, the constant series of remarks that has risen in their regard is: what have these young people done to deserve all this attention?  They have just gotten their lives underway.  The answer, of course, is that they have done nothing remarkable, in the way we usually think of remarkable deeds.  But the answer to our wonderment lies in our bible readings today.  For we have just heard the words of the apostle St. John extolling the value of faith, faith in Jesus Christ, that leads us to a close bonding with God and enables us to “conquer the world”, as St. John remarks today.  And closely bound up with this faith is the love of God that merits the beautiful encomium of Jesus to the effect that the greatest of all the commandments is to love God and to love one’s neighbor.  Simple truths we have heard time and again, but they contain the answer to our wonderment as to why a young person like Aloysius Gonzaga should be raised to sainthood.  The answer is: his faith and his love.  And this is the case with that whole series of young men and women who have caught the attention of the church over the past number of years.  Faith and love: not remarkably complicated, but significantly enriching.

A few years ago, in the 1950s and 1960s, the Detroit Lions professional football team acquired a young quarterback from Texas named Bobby Lane.  He had played college football down there.  Unfortunately, he had a drinking problem, and it only got worse during the years he played for the Lions.  There are stories about him going into huddle totally drunk, and having to be told what play to call by other players huddled there.  But that’s all Bobby had to know.  He acquired a reputation of being one of the best quarter backs in the game.  People always wondered: how could that be?  What enabled him to throw the ball on target?

This is not an exhortation about the value of drunkenness but it is an example of someone with a major problem and liability yet nonetheless achieving success.  He enjoyed only one asset, and used it well.  Such was the case with St. Aloysius.  He had faith and love enough to make him a saint.