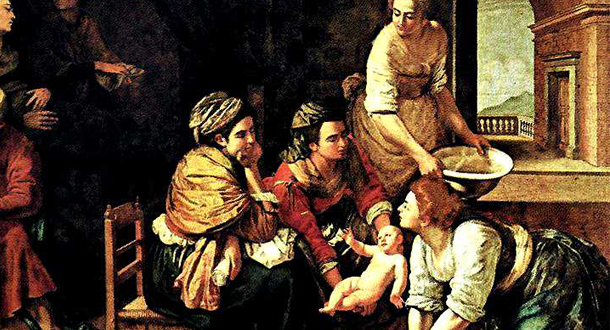 The Nativity of Saint John the Baptist

Today we celebrate the feast of John the Baptist.  His mother insisted he be named John.

“He shall be called John.” Lk 1:60   The name come from the Hebrew words Ya (Yahweh) and han (kind,gracious)   YAHWEH is MERCIFUL (Kind).

“And he John came into all the district around the Jordan, preaching a baptism of repentance for the forgiveness of sins;”   Lk 3:3  The word here for repentance is the Greek NT word metanoia. It is difficult word to translate into English.  It means to have a change of mind, to reconsider, to reassess, reexamine, to think again in a far more positive way.  Get your mind around a new monumental action of God!

Both John the Baptist and Jesus began their preaching career with:” “Repent (metanoeo), for the kingdom of heaven is at hand.” Mt 4:17  The imperative of their call is to mind a new startling approach of God in Jesus.   Jesus Himself is the “autobasilius”(Himself-Kingdom).  Origen reminds us that Jesus’ presence is the kingdom.  When we turn to Him our action takes on an excitement like none other! He is “the living One”  “In His presence is the fullness of joy.” Ps 16:11   When the young man departs from Christ in Mk 10:17 he is “gloomy” , and “he went away grieving”.   The ultimate sadness in life is to live unattached to Christ, “the Living One”!

The noun conversion metánoia used 22 times and the verb metanoeo used 34 times show us how important this concept is in Biblical tradition.  True conversion starts with wonder at the Incarnation.  “One thing I am certain that this age needs first and foremost, is to be startled, to be taught the nature of wonder.” G K Chesterton: John the Baptist complained: “I baptize in water, but among you stands One whom you do not know.”  John 1:26   Oh that we could experience what the apostles experienced on the Sea of Galilee! “The men were amazed, and said, “What kind of a man is this, that even the winds and the sea obey Him?” Mt 6:27

Key to responding to John the Baptist’s message is to what the SS calls ecstasy.  The Greek word in NT is existēmi  (to stand outside of myself)  “And he rose and immediately picked up his bed and went out before them all, so that they were all amazed existēmi and glorified God, saying, “We never saw anything like this!”  Mk 2:12 John’s message is as meaningful today as ever: “Behold, the Lamb of God!”