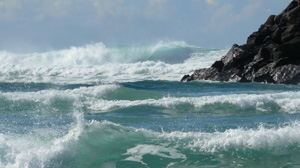 Storms.  In recent times the Catholic Church has had its share of storms. Financial scandals, pedophilia cases, clergy shortage, low church attendance, controversy over Roman Missal III, the Muslim challenge in the Middle East, etc., etc. When the ship of the Church is tossed about by storms, we are made ever more conscious of our dependence on the Lord.

But what happens when the Church causes the storm?!  The new encyclical, Laudato Si, has certainly caused a storm.  The issue of the care of the Earth is put forth by Pope Francis as a life and death issue challenging every person living on the planet.

One example:  It has been estimated that 30 billion dollars are needed to feed the world’s most hungry people, over 860 million people, for a year (FAO Director General Jacques Diouf, 2008).  The U.S. Defense Budget runs over 900 billion a year. (www.pogo.org)  That means we could feed the world’s starving with the money the military spends in just eleven days.

War begets war. And nothing pollutes like war.  It pollutes the planet.  It pollutes minds and hearts.  It destroys lives.  So we plea, “Lord save us, we are lost.” I believe the Lord is speaking through the pope and telling us that we need to conserve the planet and all who live on it.  We need renewed, creative and bold efforts for justice and peace. With faith in Jesus, we can take the winds and sea of violence to task.  Imagine the calm…and the joy!