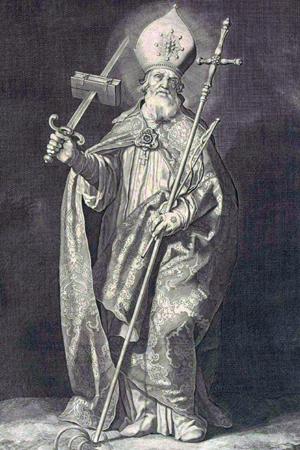 Our Universal Church celebrates this day the feast of Boniface, a great Missionary in Europe who was instrumental in reorganizing the church in Germany and the Frankish kingdom. Living in the eighth century as a Benedictine monk, he was sent to preach the Gospel in Germany, earning the title “Apostle of Germany.” His respect earned him greater responsibility as he was named Abbot and eventually Archbishop by Pope Zachary.  He died as a martyr when a group of barbarous pagans interrupted the confirmation of a group of neophytes.

The strongest connection I see with Boniface’s life and today’s gospel is the integrity and zeal for righteousness and truth.  As we continue today in this twelfth chapter of Mark’s Gospel, Jesus has already ascended to Jerusalem and we are in the final week of his life.  Jesus’ popularity has grown.  He has great influence over people which is threatening to the religious leaders.   The last line of yesterday’s gospel was, “They were seeking to arrest him, but they feared the crowd,”   Thus, in an attempt to discredit Jesus they concoct a plot involving a yes/no question which will lead Jesus into a trap regardless of his answer.

The question  is very straight forward.  “Is it lawful to pay the tax to the emperor or not?”    Notice how smoothly Mark mentions the Herodians, the people who would have sided with Herod and would stand with the emperor. Their purpose for being in the questioning was to witness to Jesus’ answer.  If Jesus speaks against paying taxes, Herod could charge Jesus as an act against the state.  Thus the political authorities would take care of the Pharisees’ problem.

If however Jesus says “Yes,” you must pay the tax then many who have been his followers will be disheartened by this message and they will begin falling away as Jesus’ credibility will be in question.   They hope to create a rift in Jesus’ group thus opening an opportunity for the Pharisees and Sadducees to win back some who have been influenced by Jesus.

What does Jesus do?   He understands that two is not an option.  And so he creates a third option which isn’t so limiting.   Those setting the trap never expected this.  There were only two options; Jesus creates something new.

I recognize how reflection on this reading after the lengthy seasons of Lent and Easter, and most recently our celebration of Pentecost gives a new expression to its meaning.  This really isn’t about trying to outwit your opponent when somehow the conversation leads into a Jesus talk.  It is far more about being in tune with how the spirit gives you wisdom and guidance all aspects of day to day life.  When we are in tune with that, our lives have a more pleasant sense of direction, purpose and joy.