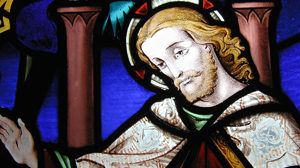 Elijah: Prophet of the Word of God

Our daily readings for the next two weeks are like two lines of music in counterpoint: the uplifting Beatitudes against the noisy battles of the prophets Elijah and Elisha. If we took a time machine back into the Scriptures it would advisedly not be into the world of the Books of Kings! A motif in the readings these weeks is the ‘Word of God’. We are dealing with prophets, those entrusted with the vocation of speaking it.

When we began the First Book of Kings we entered the story at Chapter 17, meeting Elijah, the most powerful of all the prophets. Preceding Elijah’s entrance is the death of Solomon and the return of his rebellious son, Rehoboam from Egypt, a very bad king who even proclaims his badness! Before we pass through a few more kings to the entrance of Elijah and his nemeses Ahab and Jezebel, there is a strange story told in chapter 13 that introduces the importance of the ‘Word of God’ motif.

An unnamed prophet is sent to Rehoboam who has set up a temple in Bethel and desires to subvert the memory of David and the Jerusalem temple. The prophet confronts Rehoboam in Bethel and tells him that his altar will crack, become dust and blow away. It does. When the king points to the prophet and orders the guards to seize   him, the kings arm withers and he cannot move it. The king begs pardon of God he is cured. He then offers refreshments and a gift to the prophet who in turns says that God has told him to take nothing and to leave.

But an old prophet in the area hears the story, catches up with this unnamed prophet, and tells a white lie: an angel says it will be all right to take some refreshment with him. He prevails upon the prophet to come to his home. But God had said, ‘go right home’! And so upon leaving he is stuck down by a lion who stands guard over his corpse until the old prophet retrieves it and buries it with due honor. Unfortunately, he is not laid to rest with his ancestors, and we never get to learn his name.

A strange story, but a story of a prophet who unleashes a powerful word to the King and does not follow what God had told him, insignificant though it seems. Like the motif in a piece of music its sound reminds us of something. It is there for a reason. With Elijah and Elisha we are dealing with men of the Word. Nothing is trivial apparently.

God’s Word does not always destroy. We know it can fall gently like the rain upon the good and the bad. As we hear the Scriptures we may be challenged to really listen, to be obedient. Like Sarah we might laugh at what we hear, or like Jonah, a prophet, we might make God laugh to think we can stifle the Word. The best of the prophets have their ups and downs as we will see in the readings set before us in Kings.

We are prophets by our Baptism! God does speak through us. We trust the Lord will provide words, will use us (gently?), and like Elijah today enable us to run ahead of the potential darkness that may follow behind. May the words of another prophet, Isaiah, give us strength to hear and speak God’s holy Word: ‘…have you not heard?…they that hope in the Lord will renew their strength, they will run and not grow weary’. Is 40:28-31