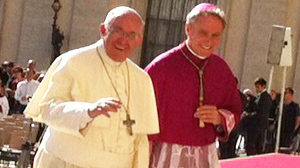 Just a few weeks ago, Pope Francis published his first book as Pope, entitled The Name of God is Mercy (New York: Random House, 2016).  It was drawn from an extended interview the Pope had with the Italian journalist Andrea Tornielli and its entire focus is on God’s infinite mercy and forgiveness—a motif that has been characteristic of this Pope from his earliest years as a priest.  Several times the Pope refers to the parable of the unforgiving servant from Matthew’s Gospel (18:21-36) and that is the gospel selection we hear today at the Eucharist in the midst of our Lenten observance.

Of particular importance is the question of Peter that prompts Jesus to tell this parable.  Peter, who himself in the gospel account will stumble more than once, asks Jesus, “Lord, if my brother or sister sins against me, how often must I forgive them?  As many as seven times?”  Jesus’ answer is astounding: “I say to you, not seven times but seventy-seven times.”  It is well known that in Jewish literature the number seven implies infinity.  Peter may have been proud of himself in posing such a generous limit to forgiveness— “seven times”!  But Jesus multiples the limit beyond infinity—there is, in fact, no limits to God’s forgiveness and that same spirit should be ours.  This is what Jesus drives home in the story he tells Peter. A servant is summoned to pay his debts to a King.  The debt is enormous, “10,000 talents.”  The first century Jewish historian Josephus notes that the total taxation that King Herod collected in a year was “ten thousand talents”.  Thus in the story Jesus tells, the servant owes something equivalent to the national debt!  He begs the king to give him more time to pay this off—probably a note of wry humor on Jesus’ part, given the impossibility of the servant ever being able to pay down this overwhelming debt.  But, instead, the extraordinarily generous king forgives the whole debt and the servant’s terrible burden is lifted!

But, of course, we know the rest of the story…  When this forgiven servant meets a fellow servant who owes him a very paltry amount (a “hundred denarii,” equivalent to a day’s wage) and also asks for some time to pay it back, instead of acting with mercy as the King had done, this servant reacts violently, choking his fellow servant and having the poor man thrown into prison.

The point of this parable is surely clear.  God’s mercy towards us is infinite and we can always ask him for forgiveness no matter how many times we have failed.  As Pope Francis has noted over and over, this is the heart of Jesus’ message, who in his healing and acts of forgiveness reveals to us “the human face of God’s mercy.”  And, we also learn that as followers of this Jesus, we, too, are to treat each other with mercy, forgiveness, and compassion.  As we pray in the Lord’s Prayer (Jesus’ parable evokes this prayer that he taught his disciples): “forgive us our trespasses as we forgive those who trespass against us.” Remembering this and acting on it is the grace we must pray for this Lent.

Fr. Donald Senior, C.P., is President Emeritus and Professor of New Testament at Catholic Theological Union.  He lives at the Passionist residence in the Hyde Park neighborhood of Chicago.