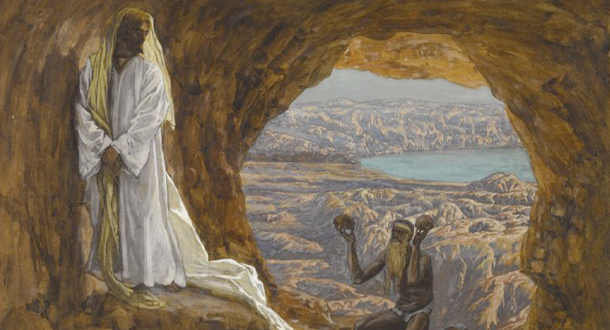 The readings for this first Sunday of Lent remind us of the deep realism of our Scriptures.  There is breathtaking beauty—the opening lines of the first reading from Genesis remind us that God has breathed the divine life within us.  Like a cosmic potter, God fashions a bag of clay and breathes into it, creating a living human being.  In the magnificent first chapter of Genesis that preceded this passage, with its mighty story of God’s creation of the universe, we learn that we have been made “in the image and likeness” of God—a similar affirmation of the inherent beauty and dignity of the human person.

But these lyrical affirmations are balanced by the account of the “fall” that commands most of this Sunday’s first reading.  Into the beauty of the universe step arrogance, violence, and the threat of death.  These opening chapters of Genesis portray the Bible’s understanding of the complexity of human life.  We are graced and sacred but also capable of failure and sin and marked by death, as reflected in the vivid stories of Genesis that follow: the lure of evil in the garden, the calamitous failure of Adam and Eve, the outbreak of violence with Cain and Abel, and the chaos of the flood that threatens the very existence of the world God created.  Thus, as history demonstrates, both beauty and death mingle in our complex heritage as human beings.

But it is also important that for the Bible death does not have the last word.  God regrets the destruction caused by the flood and promises Noah never to destroy the world, a promise sealed by the rainbow.  And eventually, God would make a pact with Abraham and Moses and the story of Israel’s redemption begins to unfold, reaching—in the conviction of Christian faith—its climax in the person of Jesus, the one who reveals God’s unconditional love for the world.

It is this vast drama of our salvation that is evoked in the readings for this first Sunday of Lent. During Lent we become aware of our frailty and mortality—the crunch of ashes on our foreheads at Ash Wednesday: “Remember, you are dust and unto dust, you shall return…”  But Lent leads to Easter and the divine promise of new, abundant, and unending life.

Also taking his cue from Genesis, Paul speaks of “two Adams” in his letter to the Romans, our second reading for today.   The sin of the first Adam ushered sin and death into the world; the “New Adam,” Jesus, brings an “abundance of grace” and new life into the world.  With the death and resurrection of Jesus, the long reign of sin and death has been shattered and hope restored.

That tension between the power of death and the power of life is played out in the drama of the gospel selection from Matthew.  The first Sunday of Lent traditionally begins with the account of Jesus’ temptation in the desert.  Immediately preceding this drama, at his baptism in the Jordan, Jesus had been suffused with God’s life-giving Spirit and declared to be God’s beloved Son.  Now, like Israel of old, Jesus enters the desert and endures the assaults of evil.  But where ancient Israel had failed, Jesus prevails—faithful to his Father’s will.   Jesus matches each attempt of Satan to lure him away from his mission with a quotation from the Scriptures: “The Lord, your God, shall you worship and him alone shall you serve.”

The readings for this Sunday bring home to us the meaning of Lent which ultimately is a preparation for Easter.  These forty days are a time to take stock, an opportunity to realize our need for repentance and renewal.  But also, a time that reminds us of God’s enduring love for us and an invitation to bask in God’s limitless forgiveness and the promise of life unending.

[This reflection appears in Fr. Senior’s regular column, “Perspectives on Scripture” in The Chicago Catholic newspaper and is used here with permission.]