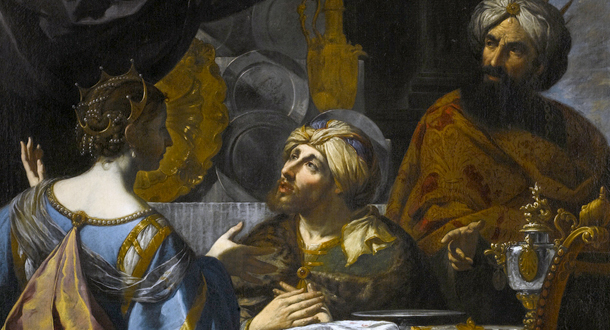 Today’s readings invite us to remember the comforting and moving words of Jesus:  “Ask and it will be given to you; seek and you will find; knock and the door will be opened to you.”  But even more dramatically, we hear the story of Queen Esther, desperate in her sorrowful plea to the Lord.

And it is quite a story!  It would take a few paragraphs to share it all with you in this brief reflection, however, in a nutshell, Esther, sadly, was orphaned but kindly raised by her cousin Mordecai.  They were both Jews and the Jews were not in favor at the time.  Enter King Xerxes whose beautiful wife humiliated him through disobedience causing the King to divorce her and begin a nationwide beauty contest to find an even more beautiful queen.  Esther fit the bill perfectly, a beauty even more wondrous than Xerxes former wife.  We now have Queen Esther.  Following Mordecai’s advice, Esther kept the fact that she was a Jew hidden from the King.  By chance, Mordecai discovered a plot against the King’s life, so he told Esther who quickly informed the King, thereby gaining great favor in his sight.  The plot thickens when an evil nobleman, who hated Mordecai and all the Jews, convinced the King to put the Jews in his Kingdom to death.  Esther began a three day fast and then asks the King to invite all the key players in our drama to a great banquet at which time she would make a special request of the King, namely, to give favor to the Jews and not death.  This enraged the evil nobleman who did not know that the night before the banquet the King read about all the good things Mordecai and his people had done for the Kingdom.  The nobleman’s plot to kill the Jews and take all their possessions backfired and it was he who was put to death by the King for his evil ways instead of good Mordecai and the beautiful Queen Esther.  In the end, Mordecai and Queen Esther inherited all the wealth of the evil, plotting nobleman.

It is in the midst of this great drama that Esther, fearing the evil she saw building up around her, prostrated herself on the ground and begged God to hear her and to deliver her from those who plotted evil and death.  She asked God to give her the right words so that she would be able to save her people from death.  As it turns out, her words are convincing: “Save us from the hand of our enemies; turn our mourning into gladness and our sorrows into wholeness.”  And this is just what the Lord did!  He hear Esther’s prayer.

Haven’t we all made such a prayer to God in times of personal distress, worry, and anxiety?  Have we not all found ourselves, as did Queen Esther, filled with fear and uncertainty and called out to God, reminding him of his love for us and our devotion and love for him?  This brings us back to the passage with which we began, found in the Gospel of Matthew.  “Ask and it will be given to you; seek and you will find; knock and the door will be opened to you.”   Great message for us all!  All we have to do is to put our trust in our loving God.  He will not let us down!