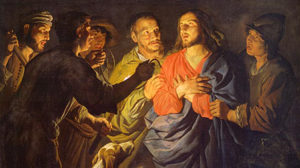 When we read this passage of Mathew’s gospel we are struck by the irony contained in it.  Jesus and the disciples are on the way to Jerusalem. We have watched the mounting opposition of the scribes and Pharisees and the chief priests. They are the power brokers and opinion makers of the Jewish people. Jesus knows his fate. He takes his disciples aside and clearly predicts his arrest, condemnation to death through crucifixion by the gentiles (the Romans) and his resurrection on the third day!  We can assume that only the Twelve heard this ominous warning for immediately after Mathew relates the story of the mother of James and John asking Jesus to give her sons seats of honor in his coming kingdom! Maybe at first it seemed that there would be a kingdom.

For as the small caravan enters Jerusalem they are greeted with shouts of joy: “Hosanna to the Son of David! Blessed is he who comes in the name of the Lord.” Those acclamations would soon change to: “Crucify him, crucify him!” Jesus again sets the apostles straight as to his fate: “The Son of man did not come to be served but to serve and give his life as a ransom for many.”  How many times do we have to be reminded of what it means to be a follower of Jesus?