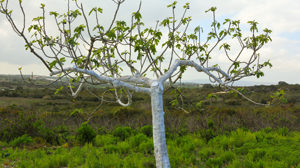 Promises play a prominent part in our lives.   A promise is inherently relational.  One can’t make a promise to oneself, though sometimes we hear someone say: I made a promise to myself that I would stop smoking.   The Latin source of the English word means “sending forth”.   It’s a reaching out from one person to another.  A promise lies at the heart of a family, starting with the promise between husband and wife.  Promise also constitutes nation-building, beginning with the pledge of allegiance that is most prominent at the time of incorporating new citizens into a nation.  Promise stands behind a five dollar bill, a guarantee of its worth for a certain amount of food, or clothing, or medicine.  And promise also features importantly in relating God and ourselves.   Though most of us make promises to God, He has taken the initiative in making promises to us.  So we hear today.

We find God promising Abraham to make him the father of a host of nations, and of their kings.  God also promised him the whole land of Canaan as a permanent possession.  But we note that He laid down the command that His covenant must be kept throughout the ages.   This doesn’t seem to be the condition for these promises to be met, however.  Broken promises, as Jewish history shows, were certainly punished, but they seemed to carry on, though refined over time.  God’s promise is as good as gold.

This refinement process seems to be at the heart of the gospel account today, as Jesus makes His claim about no one seeing death who keeps His word.  This startles and aggravates the Jews who appeal to Abraham as having died, and all the prophets, and leads into the provocative remark of Jesus that He antedated Abraham.  And here is where the Abraham saga melts into the Jesus event as the fulfillment of the promise originally made Abraham, now comes in a refined form.  God’s promises never fail, but they do undergo processing, which actually improves them.  We and the Jews are both recipients of God’s promise, but at different phases of the promise-development.

So there is a challenge latent in the promise God makes us.  It keeps unfolding and assuming various forms, and we have to be alert to these variations, lest we lose track of it.  And that’s where Lent comes in.  Lent is an occasion for refining our sensitivity to and awareness of God’s promise working itself out in our lives.  That’s what the Jews failed to do in the gospel account today.  They didn’t recognize the Abrahamic  promise latent in the Jesus figure before them.  In fact, they tried to destroy it by picking up stones to throw at Him.

We’re all liable to this mishap.  We can fail to identify Jesus in the ways He comes to us throughout our lives: in the sacraments, in the scriptures, in one another, in the poor.   Thankfully we have the Lenten season to purify and cleanse the lens of our eyes so that we can see.  Spring has just gotten underway.   We need some serious spring house-cleaning to relocate God’s promise(s) to us, at times hidden amid the debris of our lives.