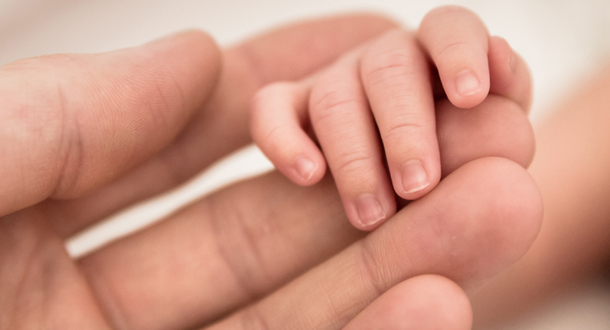 So often at the time of birth, when a new born baby is placed into its mothers arms and with a father standing by, the parents often – by way of social media today – put not just a photo of the new baby, but also add a small saying or comment something like ‘welcome into our world little one’ or a similar phrase.

It is their way of welcoming the child who has grown quietly in the secrecy of the womb, but who now comes into a world which he or she is to experience through the loving touch of other people, through family and wider society in the long, slow growth to maturity. But just for now the little innocent baby is held safely in the arms of the two people who will be closest to it and who will introduce it into family and then wider society over the years to come.

The whole vocation of parenting and the dynamics of parents and children’s relationships might be summed up in this one moment – pure gratitude to God for the gift of this child, love pouring out spontaneously, dreams and hopes for the child being expressed from the beginning and a welcome into family as the vehicle through which the child will slowly encounter life in all its mysteries.

In the society and times of Jesus it was no different. Certainly parents, and often the mother at home, had a primary role in the care and education of each child. The parents introduced the child to the world of the family and village, but more so they also introduced the child to the mystery of God and especially of God’s revelation to them in the scriptures. Normally learning was restricted to the home, but as the children grew a little older they would then attend class conducted by the rabbi of the township.

It is said that the area where Jesus lived was unique in Israel in that the people were most devoted and very knowledgeable in the scriptures; so we get a good sense that education was important to the people.

Thus we see that Jesus came from an area that valued the education of children and that he too shared this experience personally and obviously still valued it highly. In this context we need not be surprised that a unique feature of his ministry was that he did welcome children into the company of those who surrounded him, listened to him and received his message.

But in today’s text we see that Jesus also used the presence of children to make another point too. The attitudes of openness, wonder and trust that he saw in them are the very attributes that he suggests are ‘keys’ which everyone else might use in order to unlock the mystery of God’s reign amongst them.

The kingdom of God, or Reign of God, was something real and present, but one needed to enter this realm and embrace it by one’s own choice – it was not to be forced upon anyone. In this sense God’s rule was something that surrounded people and supported them, but in ways that were not institutionalised, stylised or visible in terms of the traditions that people normally associated with rulers. One needed to seek or to search and indeed to look within – for so often the gift of God’s reign manifested itself in interior freedoms and joy.

Jesus rightly associates child-like enthusiasm for discovery, their playful searching for each other in games and their delight in finding their quarry, with the openness one must bring to this embrace of all that God has hidden before our very eyes. His parables are full of such imagery!

In this light it seems from today’s readings that there is a clear message for us. If one approaches the world and life with an open mind, an open heart and an open will then we will have the right kind of attitude – a child-like openness – that will lead us to discover the Reign of God in all its many manifestations.