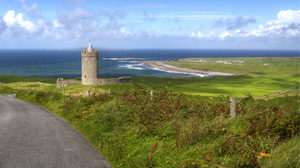 In the Irish county of Roscommon, just outside Athlone, on a small farm, with a farm house featuring two women and a man, sisters and brother to one another, all single and living together in that farmhouse all their lives: Elizabeth, Kathleen and Peter, I had a series of encounters with a family that compares  favorably with the narrative in today’s liturgical readings.

I visited them several times over the years (relatives of mine), and never did so without thinking of them in terms of the protagonists in today’s gospel: Martha, Mary and Lazarus.  The similarities were striking.  They were all single, the six of them.  At news of my coming arrival, the two women of my acquaintance hustled about setting a luncheon on the table, including Irish Whiskey, while Peter, their brother, was habitually seated outside on a wicker-lined chair, leaning up against the house, catching the noonday sun.  But he did his share of work on the farm, primarily raising livestock (sheep and pigs).  But just as Lazarus seemed to be the central attraction of the homestead in today’s gospel because of having been raised from the dead by Jesus, so Peter and his health was a central concern of his two sisters, who invariably asked me for a special prayer for Peter, as I was departing, whispering that Peter didn’t have long to live, though I visited there over a number of subsequent years and the same scenario always played out, until both Kathleen and Elizabeth died, while Peter lived on.  Whether Martha and Mary both preceded Lazarus in death, we don’t know, but the parallelism at work here suggests this might have been the case, given Jesus’ remarkable intervention in the life of Lazarus.  At any rate, hospitality looms large in both cases.

This instance of hospitality to Jesus assumed special significance in John’s account of the event today, suggesting Jesus, anticipating the ordeal awaiting Him in the next few days, was seeking one last sign of friendship and love before the dark forces of evil overshadowed Him.  The church aligns this reading with today’s account of the prophet’s mission of comfort and companionship on behalf of a people (the Jews) striving to survive in the aftermath of captivity over a long period of time, at the hands of their enemies.  And this has not been their first experience of defeat and captivity at the hands of their enemies.  It has been a perennial theme of the Jewish nation in its efforts at survival against the forces of evil aligned against them, over the centuries.  But it is an ideal framework for an equally frequent promise of God to come to their assistance in the midst of their need.  In a way it is an occasion for the hospitality of God to visit a people forever in need of it.

This sense of God ever at hand to save what is on the verge of being lost is a gem to be treasured in this Holy Week.  Whether it be the hospitality at hand for Jesus, at the welcome of Martha, Mary and Lazarus, or the sense of safety often experienced by the Jewish nation at large before the onslaught of its enemies, it is THE holy week of the year when, as never before, we can experience God at hand in the form of a Redeemer and Savior.  Hopefully, as we move through this week toward its termination with a focus on Christ hanging on the cross, we can experience the same saving influence of God at hand, to comfort and support us amid the challenges threatening us and our well-being.