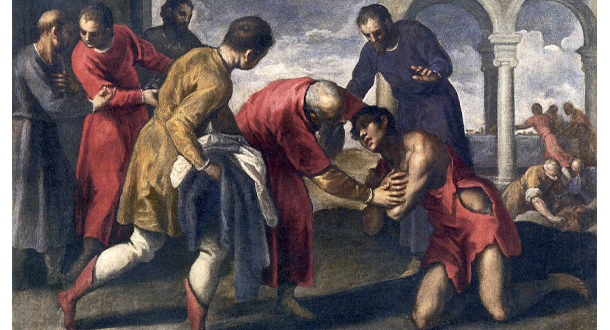 Today’s Gospel reading is Jesus’ parable of the Lost, or Prodigal Son. I remember the first time I preached on this parable. It was during Lent in 1993, when I took time off from studies and got some ministry experience at St. Paul of the Cross Passionist Retreat Center in Detroit, where I am now. The insight I received then still stays with me.

For me, the parable is about freedom. The younger son in the parable thinks that money can get him the freedom he wants, so he asks his father for the share of the inheritance coming to him, and leaves home, seemingly free to do what he wants. But he wastes the money, and when it runs out, he is reduced to feeding pigs! He realizes that at least he could be fed if he goes back home as a servant of his father. But his father, out of joy at seeing his son alive, throws a party.

The older son sees the party going on, and gets angry. He was the good one. He never disobeyed his father’s wishes, and he tells his father, that a party was never thrown for him! He is not free at all, because he thought he had to earn his father’s love. The father tries to tell him that he was always loved. The parable doesn’t tell us whether the older son is convinced or not.

The only one in the parable who is free is the father. He doesn’t hold on to his money, and he doesn’t hold any resentments. He loves both his sons. That is how God is with us! And if we are to be truly free, that is how we are to be with each other! We are called to be free to love as God loves us – free of greed, free of resentment. Knowing we have been freed from slavery to sin in Jesus Christ, we are free to be extravagant in our love towards God and the rest of the world.