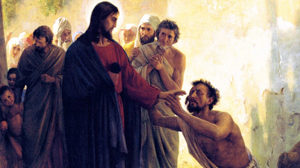 My parents had a dear friend who, late in life, began losing her eyesight. She was a tall, elegant woman with beautiful white hair. But what remains with me most is the elegance with which she accepted her loss of sight. I am not suggesting she gave into it. Bernice embraced the new reality by learning Braille, testing out the public transit system, and practicing using a white cane before she lost entirely her ability to see. In losing her ability to see, she taught be to see.

Today’s readings for the Fourth Sunday of Lent are all about seeing and not seeing. Those who are blind now see. Those who should be able to see are blind to what is right in front of them. Looking for what is not yet apparent and seeing past appearances and into the heart.

In the first reading from the Book of Samuel the Lord says, “Not as man sees does God see, because man sees the appearance but the Lord looks into the heart.” Samuel is sent to anoint a new king from among Jesse’s sons. But Samuel does not see whom he needs to see and asks Jesse if he has any other sons. It was the youngest, David, who was tending the sheep, who was being called to lead the People of Israel.

Bernice taught me that seeing is much more than having the sense of sight. I am praying this Lent for the gift to see with the eyes of Christ who sees into the hearts of others.