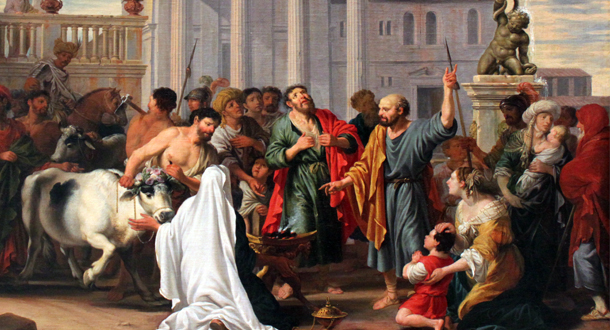 In this Easter season we continue to have readings from the Acts of the Apostles.  Today we hear a segment from Paul’s first missionary journey into the interior of Asia Minor.  Together with his companions, including Barnabas, Paul goes from city to city, preaching the gospel and sometimes meeting a hostile response—as we hear in this reading where Paul narrowly escapes death from stoning, yet revives and continues his missionary work.

Several times the passage mentions a city named Antioch, but there was more than one city named such.  “Antioch” is derived from the name of the famous earlier ruler of this region, Antiochus—a dominant figure of the Seleucid dynasty that in the two centuries before the birth of Jesus ruled over the region of Eastern Asia Minor (now Turkey), Syria and part of the northeastern area of Israel itself.  The largest and most famous “Antioch” is not the smaller town Paul visited in this missionary journey into interior of Asia Minor but the major city—the base from which he and Barnabas began their mission and to which they would return. Acts notes that when Paul and Barnabas came back, “they called the Church together and reported what God had done with them and how he had opened the door of faith to the Gentiles.  Then they spent no little time with the disciples.”

This Antioch was the third largest city in the Roman Empire at the time of Paul and stood astride a major trade between east and west.  It figures prominently in the Acts of the Apostles.  Some of the Jewish Christians scattered when persecution broke out in Jerusalem after the stoning of Steven, fled to Antioch and began to baptize Greeks, that is, Gentiles.  At the time this was a bold step that alarmed some of the Jewish Christians leaders in Jerusalem so they sent Barnabas, one of the most beloved and trusted leaders of the early church, to check things out. He found that indeed the Gentile Christians of Antioch were filled with the Holy Spirit and Barnabas “rejoiced” and “encouraged” these new Christians.  Later Barnabas would go to Tarsus, where Paul had been sent after stirring up controversy in Jerusalem, and bring Paul to Antioch also.  It was there that Paul would be instructed further in his new-found faith and from there he and Barnabas would begin the first missionary journey to the Gentile world.

Later we learn that in was in this mixed community of Jewish and Gentile Christians, located in a large and dynamic city, that the followers of Jesus were first called “Christians.”  The Christian faith of this community remained strong through out the early centuries of the Church as the presence of such great early Christian leaders such as Ignatius of Antioch testify, a faith brought to this region by people who were fleeing their lives but did not lack in courage and fidelity.

I am reminded of a comment by the great German New Testament scholar, Martin Hengel, who observed that the rapid spread of early Christianity was not due simply to a compelling message but to the courage and witness of compelling people.  I have had the privilege numerous times, while leading study tours to the region, of visiting the modern Turkish city of Antakya, the site of ancient Antioch.  In the heart of this bustling Muslim city near the border of tortured present-day Syria, there is a small but very vibrant Christian community, composed of Roman Catholics and Orthodox Christians who work together in a remarkable way in order to give witness to their Muslim neighbors.  One of the lessons we can take from the readings of these early stages of the Christian community in the Acts of the Apostles, is that we, too, are called to give courageous and persevering witness to the beauty of our Christian faith, no matter what our circumstances may be.