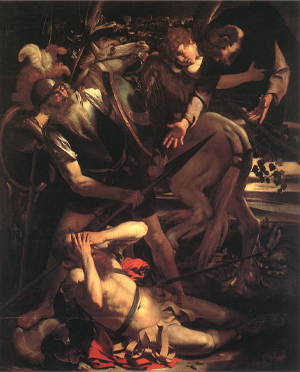 The first reading for today is the famous account of Paul’s conversion in the Acts of the Apostles.  Paul was introduced earlier in Luke’s account as the young man who watched over the cloaks of the mob that stoned Stephen, the first Christian martyr.  Luke soberly notes, “And Saul approved of their killing him.”  But now we see a dramatic turnabout.  The intensely zealous Paul who was persecuting the followers of Jesus is on his way to Damascus, “breathing murderous threats against the disciples of the Lord,” and intent on bringing back to Jerusalem in chains “any men or women who belonged to the Way” (the first name given to the community of Jesus’ followers, according to Acts).

But as Paul nears Damascus, he encounters the Crucified and Risen Christ and his life is changed forever.  The persecutor of Christians becomes the ardent missionary to the Gentiles.  As the Lord instructs Ananias who will minister to Paul in his blindness, “…this man is a chosen instrument of mine to carry my name before Gentiles, kings, and children of Israel.”

Biblical interpreters have noted the difference between the dramatic story of Paul’s conversion described in Acts and that of Paul’s own reflections on his first encounter with the Risen Christ in his Letter to the Galatians.  Some Jewish Christians had challenged Paul’s mission in Galatia and questioned his conviction that God has reached out to the Gentiles without requiring that they first become Jewish converts, and, therefore, needing first to adhere to the practices of the Mosaic law such as Sabbath observance, circumcision, and a kosher diet.  Faced with this opposition, Paul affirms his own credentials as one appointed as an apostle by the Risen Christ.  Paul describes this inaugural experience not in the dramatic terms of the story in Acts but rather as a “call” or “vocation” from God—one that was designated for him in God’s providence even before he was born: “But when God, who had set me apart before I was born and called me through his grace, was pleased to reveal his Son to me, so that I might proclaim him among the Gentiles.. (Galatians 1:15).

Looking back on his experience, Paul realizes that his vocation as apostle to the Gentiles was his God-given destiny.  Several times in his letters Paul expresses his deep regret that in his misguided zeal he had persecuted “the church of God,” but he remained secure in his vocation, aware of Christ’s love for him despite his failings.

We will be hearing a lot of selections from the Acts of the Apostles during this Easter Season leading up to Pentecost.  The whole second half of Acts focuses on the dynamic missionary journeys of Paul, as he brings the gospel to Asia Minor (present-day Turkey), Macedonia and Achaia (present-day Greece) and beyond.  He indeed was God’s “chosen vessel” set apart to bring the message of God’s intense love and mercy to the world.

The beauty here is not only Paul’s matchless contribution to the spread of the gospel, but the fact that God works with those who are flawed and very human.  We live in a unique moment in history—a threat to our lives that both tests our own faith and, and at the same time, offers opportunities for us to proclaim its message of hope to a troubled and frightened world.  The example of Paul can be our inspiration.