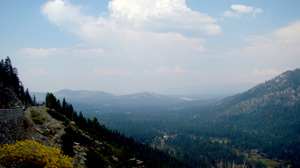 There is a widespread theology that Jesus came primarily to die in order to satisfy the blood lust of a vengeful, angry God who had become so fed up with humans that the gates of heaven were closed off unless an innocent victim was brutally murdered. Yet after he rose, Jesus never said to his disciples, “There! Now your sins are forgiven and you can get into heaven again!” Instead, Jesus’ last messages to his disciples were centered on unity – between himself and God, between us as people, and between us and God. He charges his disciples to live out of that unity – forgiving sins, seeking the lost, and drawing all creation into one, with their primary task defined as “Love one another.” He plainly states that the Father is in him, he is in us, and therefore we are in the Father. This mirrors the Catholic teaching on the Trinity, in which God’s very nature is perfect relationship, a relationship that we, too, are called to participate in.

This raises alternate possibilities. For instance, did Jesus die to assuage the vengeance of an angry God disgusted with people, or did he die as a result of the vengeful fear of the powers that sought to control him and eliminate his threatening message? Was his purpose to “open the gates of heaven” that would otherwise remain closed forever, or to remain so true to his mission of love and union that he was willing to endure even death rather than abandon us? What if Jesus “saves” us, not by unilaterally bridging our estrangement from a rage-filled King, but by freeing us to live as divinely created human beings with one foot already in the Kingdom of God? What if “salvation” has more to do with understanding our genuine identity as members of the Body of Christ, responsible for each other and empowered to actively participate in the divinity that created us, if we would just let go of our narrow, rules-bound, exclusionary, power-driven view of God and the world?

This is a radical message for most. Yet it is a thread that runs throughout our Catholic Christian history, professed by wise theologians through the ages – Origen, Irenaeus, Maximus the Confessor, Hildegarde, Bonaventure, Francis, and many more. According to these recognized pillars of our faith, the incarnation is not primarily a remedy for sin, but the bodily enactment of the primacy of creative love. There are those who regard this theology of unity and love as cheapening or watering down the message. To the contrary, the depth and breadth of love that Jesus demands and illustrates is far more demanding and difficult to live out than clinging to a black-and-white view of sin, judgment, and condemnation. It can even get us crucified!

This Easter season, then, as I reflect on Jesus’ last words to his beloved disciples, I resolve to grow into unity with Christ. I take into prayer my entire being, my assumptions, my beliefs, and my behaviors, and offer them all to God, that God may continually recreate me in the image of Christ. Perhaps, at least at times, I can live in such a way that those who speak of me speak of Christ, and those who think of me think of Christ. I fall so far short, yet I can think of no greater goal, and no higher calling. I will never fully reach it in this life, but by the grace of God, I’m going to try! Even if it gets me crucified.