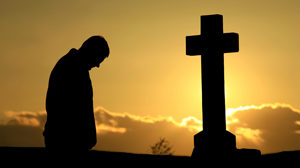 “I have told you this so that you may not fall away.”

The community of the evangelist John lived during turbulent, polarizing times when their faith was severely tested.  John wrote his gospel sometime after 85 AD, likely to a community undergoing a painful rejection and separation, exclusion from its life in the synagogue, from the broader Jewish society to which its members belonged.  This gospel may also have reflected a time of inner-Johannine community conflict, a controversy in which some disciples who had once believed in Jesus as Messiah were now abandoning the community.  In Jn 8:31, Jesus addresses “the Jews who had believed in him.”  Could they be the same followers who in Jesus’ Bread of Life discourse (Jn 6:2) had walked away in large numbers?  Whatever the state of affairs, the Johannine community was suffering through a severe crisis of faith.

In today’s gospel, John reminds his community of what Jesus said to his disciples.  Jesus warned that just as he would be rejected and put to death, they too would suffer similar trials.  Jesus quickly adds, however, that he would send the Holy Spirit — the Advocate — to bear witness to his salvific ministry.  His departure will signal for his disciples, not that his work has come to an end, but that it is now to be continued by them.  He will send the Advocate to be their strength, so that they too will bear witness to Jesus during times of trouble.

Jesus offers these words of comfort to the disciples standing before him, to John’s fragile community, and to us.  For most of us, our trials may not resemble the violent extremism of many parts of the world.  Ours may be a more subtle poison, an insidious wearing away at our faith through indifference, moral relativism, societal ridicule — especially those who have walked away from the faith.

But Jesus wants not only to comfort us.  He is exhorting us, inspiring us to hold to our beliefs, to continue witnessing to our faith, especially during troubled times.  The work of Jesus didn’t end 2,000 years ago.  That was only the beginning.  We are called to continue his work today.  The Advocate, the witness, will show us how to witness to the world.  And if we get shaky knees, if we slip and begin to lose our step, Jesus will say to us: “I have told you this so that you may not fall away.”