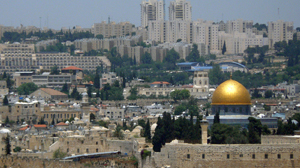 “But John left them and returned to Jerusalem.”

Those brief words, buried in an episode on Paul’s “word of exhortation” at a synagogue in Antioch, foreshadow sharp disagreement ahead between Paul and Barnabas over John Mark who rather abruptly “left them and returned to Jerusalem.”  Those words also remind us there has never been a golden age in the life of the Church. Rather, it is a Church that from time to time has been pocked by disagreement, divisions, and debate regarding its mission in the world.

Why Mark ran for home we do not know.  Did he want to return to the nurture and support of his mother in Jerusalem? Was he fearful of the travels and labors?  It isn’t certain.  What is certain, however, is that Paul resented his departure.  And it laid the foundation for a sharp contention between him and Barnabas, who was Mark’s uncle.

When it came time for the second journey of Paul and Barnabas, the division erupted.  Barnabas was persistent in taking along Mark. Paul was adamantly opposed to this proposal, based on Mark’s desertion at Perga.

Knowing that Paul would not take him on his next journey must have stung Mark deeply, just as knowing that Barnabas was willing to give him a second chance gave Mark the encouragement he needed.

Both Paul’s negative response, combined with Barnabas’ positive action, must have had a profound effect on Mark.  In Jerusalem, Mark undoubtedly reflected on what had happened.  He listened to both Paul and Barnabas because both were right.  Both forced Mark to face himself and his mission.  His was a mission, not unlike Paul’s, who at that synagogue offered “a word of exhortation.”  Mark gave the Church the gift of his Gospel.

In our time, too, the Church has been characterized by division and occasional overheated debate.  Across 2,000 years, Paul and Barnabas still argue.  Should we be discouraged?  Not at all.

The words “But John left them and returned to Jerusalem,” should instead offer us encouragement.  They mean that the Holy Spirit can guide us through our very human, messy and contentious ways.  They mean that like Mark, we need to return to Jerusalem, home to the nurture of mother Church, to receive a word of exhortation, to reflect and understand more fully the needs of the world today and of our mission to address them — our gift to the world.