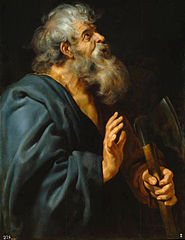 Today’s feast is the day when we remember St. Matthias, the faithful follower of the Lord who was chosen to be the replacement of the “apostate apostle” Judas.  Just imagine those early days after the resurrection of the Lord.  Surely the disciples felt deeply the reality of one of their very own, one who was so trusted and close to the Lord, who through his betrayal would both abandon the Lord as well as his brother apostles.  With his demise there was a hole in the ranks.  The empty seat could not be overlooked or ignored.  Even then, so soon after the death and resurrection of Jesus, there was an awareness of “the Twelve” as signifying something special in the foundation of the developing Church.  Hence, there was the need to elect or cast lots and call forth another so that “the Twelve” could be whole and complete once again.  And so it was that Matthias was nominated, along with Barsabbas or Justus.  It was Peter who called for the election as he spoke with about one hundred and twenty persons, as the scriptures tell us, including both men and women.  First they prayed to the Lord who “knows the hearts of all” asking him to reveal by their vote who he had chosen!  How spirit-filled was this moment!  And the lot fell upon Matthias, one who had been a follower with the Twelve the whole time – which meant from the baptism of John until the day of the resurrection of the Lord.   The Twelve were again complete and the Church was ready for Pentecost!

Doesn’t the Lord continue to work among his people today in the community of the Church?  And isn’t it amazing the way the Holy Spirit continues to work through specially chosen men and women to bring life day by day to the Church.  Just look around you the next time you are at Mass or some special parish celebration.  Look at all the wonderful disciples, so spirit-filled, loving, selfless, and eager to care for one another and to serve!  The disciples are there in so many ways: lectors and Eucharistic ministers; members of the St. Vincent de Paul society and religious education teachers; companions in the RCIA and people who visit the sick, the incarcerated, and the elderly.  They are there! The Lord’s spirit is alive and among us today as it was so very, very long ago.  We have reason to rejoice and to open our hearts eagerly for the coming of Holy Spirit this Pentecost.