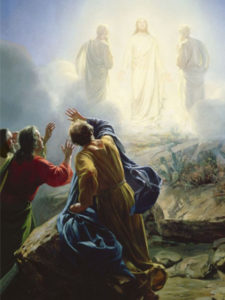 This short periscope in the Gospel of Mark is immediately preceded by the Transfiguration of Jesus.

When Jesus and the disciples come down the mountain they are met by a crowd of people.  The crowd is upset with the disciples because they are unable to perform the miracles that Jesus could perform. Mark ascribed the failure of the disciples not to lack of faith, but inattention to the source of faith – prayer and fasting.

Jesus hears the voice of a man asking for help for his only child, who was possessed.  Jesus asked the father how long this has been happening?    He responded “since childhood.” Then the father says “Please help my child If you can heal him”.  Jesus seems to be taken aback by “If you can.”  Jesus says “you need faith.”  The father replies “I do have faith help my unbelief!”  Jesus heals the young man because of the father’s faith.  He assures him this is a permanent cure Satan will not enter him again. There is something poignant about this miracle.  Jesus is always attentive to the voice of His own Father, when He speaks.  Somehow the prayer of any father for his children gets a special hearing from Jesus.

The great medieval artist Raphael was born on Good Friday, April 6th, 1485.  Raphael had a special  devotion to the Transfiguration in the life of Jesus.   He spent the last couple of years of his life trying to perfect his painting of this event. Finally, in the middle of the night he woke up  with the answer to why he could not be satisfied with the painting!  The answer he came to was that Jesus and the disciples could not stay up in the mountain, but had to come down the mountain to the people and their needs.

In other words Raphael in his finished portrayal of the Transfiguration has a young man throwing off his crutches and walking strong and strait.  He was experiencing a permanent cure.

It is very interesting that Raphael died on Good Friday, April 6, 1520, at the age of thirty-five years.