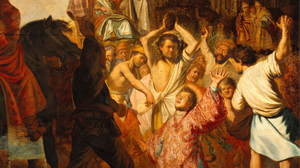 Although the celebration of St. Athanasius is celebrated annually on May 2nd, the readings are usually those of the Easter cycle. Today’s readings portray the vivid narrative of the death of Stephen, whom we consider the “protomartyr”, or “first martyr” of the Church. This is followed by a Gospel passage from the ending of John’s 6th Chapter, the well-known discourse on the ‘bread of life.”

The death of Stephen is brought on by his condemnation of the leaders of the people…you are just like your ancestors. Which of the prophets did your ancestors not persecute? They put to death those who foretold the coming of the righteous one, whose betrayers and murderers you have now become.

With the menacing crowd before him, Stephen has a “theophany”, a vision of the heavens…But Stephen, filled with the Holy Spirit, looked up intently to heaven and saw the glory of God and Jesus standing at the right hand of God…

The crowd rushed him, forcing him out of the city and into a killing field, where they began to stone him. But Stephen prays for his muderers, “Lord, do not hold this sin against them,” and when he said this, he fell asleep.

The death of Stephen is cast against the backdrop of the Crucifixion of Jesus: there is the confrontation with the authorities with the consequent antagonism of the popular religious leadership, the frenzy of the crowd, the movement out of the city, and the final moments of the execution when the condemned prays for the forgiveness of his murderers.

Although we speak of Stephen as the “first martyr” (“protomartyr”), it is really the “Lamb who was slain on our behalf”, Jesus, who is the first to die in witness to the mission of mercy for sinners and for the sake of the kingdom that is being established in his blood.

Stephen’s death, like the deaths of Peter and Andrew, which were more literally crucifixion (upside down, and on a diagonal cross), are the literal consequences of “taking up one’s cross and following Jesus.”

Through this account of Stephen’s death, the Church recognizes the long line of faithful followers of Christ who have confronted the evil that afflicts the faithful, and pay with their lives. This is not something that we have not known in our own day. The “lilies of the field” continue to bloom in the face of human evil. The Church has never been without the witness (“martyr” in Greek) of those brave enough to face evil down, supported by the vision of God’s supporting presence, and the readiness to forgive.

We Passionists have known the witness of St. Maria Goretti, who in 1902 faced the evil of a frenzied lust with the strength of the conviction that having recently made her first communion, her body was a harbor of the Eucharist, not to be defiled by Alessandro’s adolescent passion. In her final hours, lying atop a marble operating table in the hospital of Nettuno, she was able to respond to the question, “Marietta, do you forgive Alessandro?,” with the clarity of one who knew the story of Jesus on the Cross, “How can I not forgive him, since Jesus already has?”

For Maria Goretti, the Bread of Life, which she had so recently received for the first time, was fulfilled in her passage from death to eternal life. I am the bread of life; whoever comes to me will never hunger, and whoever believes in me will never thirst.