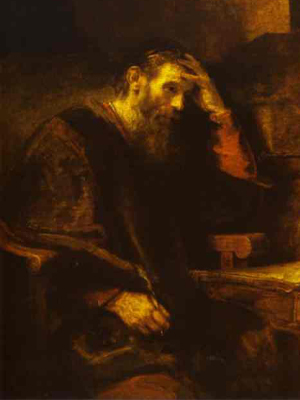 A dream come true!  I suspect that was what St. Paul was thinking as he arrived in Athens.  Here he was, in Athens, the intellectual and cultural capital of the world!  And did he have important Good News to bring!

He made his way to the Areopagus, the center of the intellectual life of Western Civilization, observed the statues of the all the gods from every part of the Roman Empire noting that there was even a statue dedicated to the “unknown” god.  He used that statue as his entrée into speaking about what God had done for us through the life, death and resurrection of Jesus Christ.

He preached a beautiful classic sermon in which he revealed that Jesus Christ, the Son of the living God, has made us the sons and daughter of God.  So, we are called to repent and live in the new life we have received through Jesus Christ.  No doubt, Paul used all of his oratorical skills and force of personality to convince his listeners of the truth of his words.  He finishes with a flourish and waits expectantly for the response from the people around him.

But the response of his listeners was not anything like what he expected.  There was no spontaneous applause.  Some scoffed; others say “We should like to hear you on this some other time.”  Ho-hum.  No gasps, no exclamations of wonder, no conversion of heart, no expressions of belief.  There were a few in the crowd who became believers.  We are simply told, “And so Paul left them.”

The lukewarm response of the Athenians to the message of the Gospel was not just a disappointment for Paul, it was personally devastating.  As Paul said in his first letter to the Corinthians, “I came to you in weakness, fear and much trembling.…” (see I Corinthians 2:1-5).  He had used all his considerable intellectual and oratorical skills to bring the Good News to the Athenians and almost nothing had come of it.  A defeat that shook Paul to his very core.  Yet Acts reports, “After this he left Athens and went to Corinth.”

Have you ever done your very best to help someone, to convince them that the path they’re traveling only leads to heartache and death, only to have them totally ignore you?  Have you had that experience of utter failure?  Then you know how Paul felt in Athens.  Even though Paul lost his faith in his well-known oratorial skills, Paul not only went on, he became utterly convinced that Jesus Crucified was the only message that could move men and women’s hearts.  Strangely, he had his greatest success in Corinth!  And what a city that was.  Corinth was a major port city, corrupt, libertine, known throughout the Roman empire as a wide-open city populated by the very worst kind of people.  Yet here Paul preached only about Christ Crucified and found that a suffering Son of God who loved with his whole being was the transforming message.  The educated and wealthy of Athens were unmoved.  The suffering and outcasts of Corinth were transformed by the love they recognized in the heart of Christ.

As we recall this great Apostle, his perseverance in the face of defeat and his willingness to change and depend more on Christ, we pray for the grace to surrender the brokenness of our lives to God’s love, confident that through our weakness, God will bring us ever closer into His love.